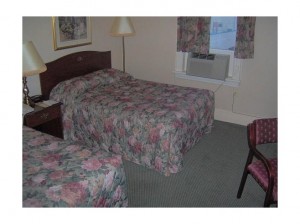 Room 2005
by Matt Ronquillo
My head is in the doorway. One of them is rocking back and forth in a black office chair. They’re all spit-balling ideas for a coming-to-terms children’s book. It’s about their friend Jose. It would be called Jose The Narcoleptic Giant. He would get inspired by the mayor’s Clean Up This City! speech and Jose’d grab a broom, taking the message literally, but would pitch forward mid-sweep onto a group of bad guys.
The rocking man says, “Sidewalk comes at him like this,” zipping his open palm up to his face. His hand warrants sudden, close attention. His eyes glaze in some personal realization that acts as an opiate. Then he snaps back into dark focus and sucks air into his clenched teeth with a sound like pain is surely coming but just not being felt yet. He looks menacingly upward with chin tilted inward. “In a completely unrelated note, clouds move across the sky like thisss.” He mashes his hands together and separates them with his fingers extended in an outward spreading, billowing out the breath through re-clenched teeth.
A guy crawls on all fours in an arch on the wall behind him. Barks, “I want to rip the face off the sky and be interpreted one-hundred percent correctly. Stop cackling so much unwarranted.”
A girl in a red corset in the room’s south-west corner is levitating hardcore: “Go back to that two-week period in two-thousand…five? and tell myself that look here’s some entry-level psych lit that says people who think they’re either a prophet witnessing the anti-Christ or one of the anti-Christ’s false prophets — not exactly sure which — should start treating it as a ha-ha-huge deal that needs to be addressed right now.”
Her sister at the big conference room table holds a compact mirror to her face, lightly applying powder: “Change some of my chemical makeup.” She looks up at no one, says, “In a dream,” then squints back into the mirror and continues matter-of-factly, “And stop weaving lies into truth in brush-off fashion so as to realize I’m a dirty manipulator and probably bat shit.” She adopts a dopey version of her sister’s voice and crosses her eyes. Tilts her head left and right, “Realize that shaping a perception of myself into conflicted beauty is not what other people are even seeing.”
I close the door and swear off looking in again, knowing I will again. I sit in this hall. I have nothing to do but put my elbows on my knees and keep the security guard costume clean. Smile while I direct pretty girls to the other doors where the exhibits are displayed controlled and deliberately. And explain there’s nothing in the ole broom closet here but cobwebs.