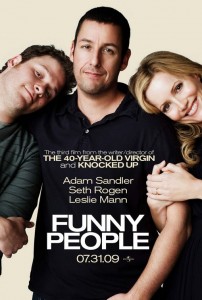 Film Review of the movie Funny People
by Ben Macnair
3 stars
It is often said that less is more. Funny People is a very good example at that. This film is too long for its story, its character development, and its ideas.
It stars Adam Sandler as George, a successful, but characterless comedian who has sold out to make big budget films that do nothing for comedy, but a lot for his bank balance. He likes his life, with its large cheques, and available female fans, but when he is diagnosed with a terminal disease he realises how empty and vacuous his life is. Only an experimental drug can save him, and that only has an 8% chance of working.
George returns to the live comedy circuit, greeted like a returning hero, until he begins his set of dark comedy. The following act, Ira (Seth Rogan) a struggling comedy writer bombs even worse, but it is at that gig where the two meet, and start an unlikely partnership. Ira writes gags for George, as well as performing as his opening act.
As the film progresses, both George and Ira becoming increasingly better performers, although they still have their problems. Ira’s housemate is a Comedy actor, appearing in the dire sit-com “Yo-Teach” but they have their eye on the same girl. She goes for the housemate with his glamorous life, rather than Ira who still works at a super-market and sleeps on the couch. George realizes that he only loved one women, and goes to see her, knowing that he does not have long for the world.
He tries to mend fences with his comedy friends, his sister and her family, as well as his Mum and Dad, and eventually meets up with the one he let go, even though she has moved on, with a husband, Clarke, (Eric Bana) and two young daughters. She claims to love George, but her life has moved on, and Ira knows that George wants to break up the family.
It is this part of the film that needed the most work. It seems to belong in a different film altogether, and an actor of Bana’s stature really deserves a three dimensional character, rather than the outline that he is expected to work with.
In one of those Hollywood twists, George is in the 8% who responds to the treatment, and in what should have been a turning point in the film, there is no real change in George. He is not really changed by a life threatening disease, he does not change his life, or set out to become a better man for the chance he has been gifted.
Broad brush strokes of comedy are used throughout the film, and from the same group that gave the world Knocked Up, or the 40 Year Old Virgin, this a step backwards. There are even times when the film jumps the shark.
A Myspace gig pays George a lot of money, but king of the bedsit singers James Taylor is also performing at the same gig. An unsurprisingly foul-mouthed Cameo from Eminem sees him talk of death as a career option, before a confrontation with Ray Ramano. It seems not everyone loves Raymond, with his way of talking very slowly to smaller people.
Sarah Silverman appears as a cameo, and so do a number of other people, but not all of them work successfully.
The film does not have a happy ending. We do not see George wander into the sunset with the girl he loved, but we do see George and Ira talking at the end of the film (2 and a half hours later), and may be there is a sense of redemption. We see Ira talking to the girl who slept with his housemate, whilst George has a lot of making up to do, but seems ready to move on.
The film is well acted, and well written, but there is far too much padding, far too many k**b gags and far too many story lines in a film which would have been so much better had everyone involved realised that less is more for a reason.