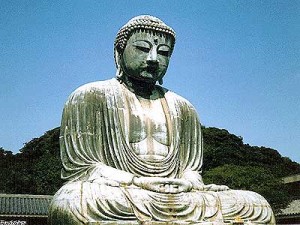 The Aztec Buddha
by J. Claudius Cloyd
There’re a lot of high school kids on the #14 at this time of day. Itâ€™s a hot day. No air-conditioning, and everyone has their window open. Itâ€™s sticky too. The girls arenâ€™t wearing perfume but they emit a fragrance that smells like roses and honey. Itâ€™s probably just their shampoo. Meâ€¦ Iâ€™m wearing black slacks, a navy blue tie, and a white shirt thatâ€™s beginning to become off-white and a bit stale around the armpits. Dress code. I wear glasses with wire frames, and I have short hair thatâ€™s dyed black. The boys are sagging, wearing their hats backwards and are talking like theyâ€™re black. Thatâ€™s ok. I used to want to be black too, but thereâ€™s really no point in wanting to be something that youâ€™re not.
Though Iâ€™m only 4 or 5 years older, their conversations donâ€™t make much sense to me, and I donâ€™t try to make any sense out of them. Instead a breeze of perverse delight guides my gaze towards their low cut shirts, and I look to the window, imagining myself falling into those perspiring gaps. None of them suspect, and go about their gossip and barking laughter.
By 60th Avenue, most of the kids have gotten off. But more people are getting on. By the time we get to Hawthorne, the seats fill up and a few people are standing in the aisles.
Somewhere around 27th in Hawthorne is where this short pudgy man with a handle bar mustache gets on. He looks like an Aztec Buddha in bumâ€™s clothing. Iâ€™ve seen this guy a whole bunch of times. His breath reeks of beer, and his clothes smell like feet and urine. If he talks to you, he doesnâ€™t ask what your name is; he names you.
He stumbles, plunking each foot haphazardly forward. A couple of times he veers backwards. As the bus driver presses on the gas, he begins to fall forward. Nobody catches him. People are asking him if heâ€™s alright, but no one is offering to help him up. He grabs some guyâ€™s knee, and eventually stabilizes himself with one of the bars. He says to the guy with the knee, â€œDonâ€™t get too excited, I ainâ€™t no faggot.â€ The guy with the knee doesnâ€™t say anything.
The seat next to me opens up, and the drunken Buddha takes it. He gives me a look like Iâ€™ve done something distasteful. â€œWhereâ€™re you goinâ€™?â€
I tell him Iâ€™m going to work.
â€œShit man, youâ€™d probably get there faster if you put on your cape and flew.â€
What does a person say to that? Who knows, so I just smile.
â€œHey everybody, olâ€™ Clark Kent thinks heâ€™s foolinâ€™ everybody with his glasses, but he ainâ€™t foolinâ€™ shitâ€¦â€ he ejaculates in a drunken drawl. The people in back laugh. I laugh too. When he asks me where I work, I tell him.
â€œYou know what they call that place?â€ he says, mocking confidentiality. Then he whispers, â€œPsycho-Safeway.â€ I tell him that I know.
At this point, the bus is approaching the courthouse. Itâ€™s a big stony, concrete block with very little personality. The man next to me scowls, points, and begins shouting, â€œHey look everybody! Itâ€™s my home!â€ He raises his middle finger and says: â€œFuck you, home!â€ Again, everyone on the bus laughs. So do I. The only one who isnâ€™t is him.

0 thoughts on “The Aztec Buddha”