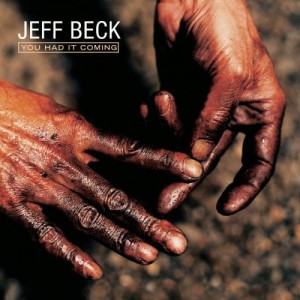 You Had it Coming by Jeff Beck
Review by Ben Macnair
7 out of 10– Epic Records – 5099750 101 827
Jeff Beck’s album from 2001 contained a number of new moods from the iconoclastic guitarist and composer.
Having put space age guitar wizardry into the Yardbirds, invented proto heavy metal with The Jeff Beck Group, and Beck, Boggart and Appice, and explored the outer reaches of Jazz Rock Fusion in the late 1970’s, this album still finds him looking to extend the sonic capabilities of the electric guitar.
Along with Jimmy Page and Eric Clapton, he completed the triumvirate of guitar heroes who first cut their teeth playing with the Yardbirds, and of the three he has always seemed to be the most creatively restless, neither resting on his laurels, or becoming a high paid gun for hire.
You Had it Coming explores a number of differing moods within its thirty seven minute running time. Earthquake and Roy’s Toy are heavy guitar instrumentals, while Rollin’ and Tumblin’ takes Muddy Water’s blueprint and gives it a new century shine, with powerful vocals from singer Imogen Heap.
There are softer moments on the album, such as Beck’s version of Nitin Sawhney’s Nadia, which mixes screaming lead guitar with an eastern melody, and a lilting melody. Blackbird finds Beck dueting with a Blackbird, in one of his most eloquently experimental moments. Album closer Suspension is a minimalist guitar ballad that finds Beck speaking with as few notes as he can.
This is an album full of surprises, and although it may not contain as much guitar as those by Joe Satriani, Steve Vai, or even Jeff Beck’s earlier work, there is still plenty here to show an alternate route to an album of guitar pyrotechnics.