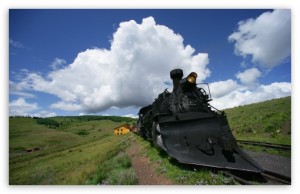 Lost Toys (exerpt)
by Marty Lloyd Woldman
narrator
The railroad system is the endless hard-on of westward expanse. Stretching the grid over the heathen wild was the steam-powered prick of manifest blasphemy.
Conversely, the appeal of the bar is strictly maternal. The bar is where patrons curl up in the belly of decay and drink of amniotic wells. It is the mother that will always love her patrons with new bottles of poison to nurse–easing her children out of this world in the fashion they came into it.
Where the 19th century WASP cock meets the womb of bar is where gestates the great subliminal clash of Western myth–where the strategy of our machines rust with pull-tab cans, barbed tongue trajectories, and the bloat of Super Bowls forgotten.
It is one such wasteland in which we set our stage; a wasteland of rather forgettable ilk–a wasteland with proprietors who once had children that whiled away their formative evenings in the purgatory alley between bar and track, playing with toys bestowed by either envious spinsters or would-be perverts over the course of their patronage. Children whose tits eventually got larger and whose dicks eventually got harder–the male faction ran off to gun down A-rabs, and the female faction churned out Christian babies in a horrific trailer park menagerie.
Familial resentments arose and subsided. New generations replaced old, and nothing changed but the faces.
Still since, the toys have remained in the wasteland between womb of bar and cock of track, where the goddamned Missouri Pacific still makes his noxious rounds and the barflies still swill their doom. And here it is the toys that have the strangest story to tell. After 20 years of rot and neglect, it is they who can best tell us the most elegant death this empire an swallow… because the fall is no longer an issue of ‘if’ but ‘how’. So let us learn to love our demise like toys–the standard to which our holiest can aspire.