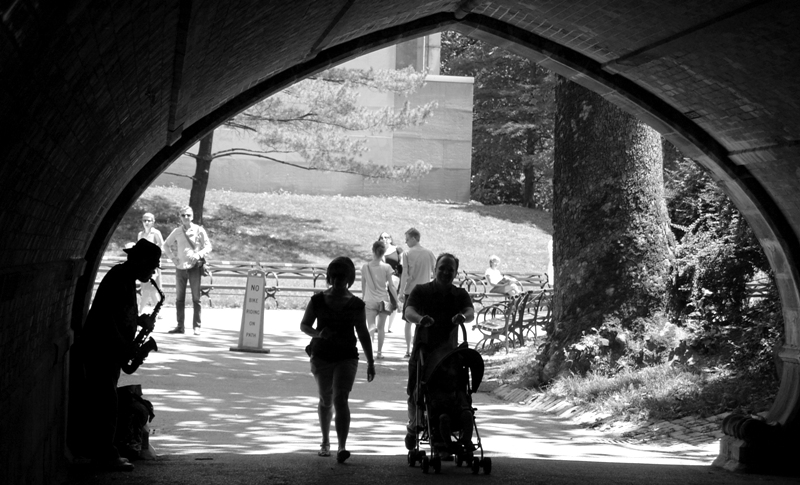 jazz sounds in suburban-town café,
middle-aged man gone gray
with a brown-brimmed hat
and well trimmed snow-flake mustache:
by Nathaniel Kostar
in the corner of the orange-purple inoffensive café
where every cookie, cake, strudel and chocolate’s
been cut weighed and politely packaged
and the coffee beans are the farthest they’ve been (and
will go) from the weary hands that picked them,
he sits over computer, face gaunt but healthy,
high white cheek bones & quiet stone eyes still fresh and young,
though surrounded by wrinkles encroaching like mutinous
moats.
really?
who knows.
the fact of the matter is the dude looks like a suburban cowboy,
some cross between unsuccessful bohemian painter
& ex-president of the young college republicans—
and he’s probably
just a ‘regular guy,’
a “regular guy?”
a regular guy.
he is kind in ordinary circumstances brutal or ignorant or cowardly
at the cliff—concerned mainly with preservation and prosperity
of self and clan—acceptably eccentric—salted by a few obvious
ideals—cordial—harmless—loving—he’ll probably finish his coffee,
go home and jerk off in his hat—or watch Sunday football—or read
the paper—or have a heart attack—who knows?
but if I was casting a movie or picking the protagonist for a novel,
the Joe Smoe with the Santa Clause beard gone-wild slouched
in the recliner humbly numbly listening to jazz as though Nina Simone
was another car passing down the highway—& drooling
on himself from time to time in a doze—& occasionally scratching
his junk without giving a damn who’s watching—I’d pick him
to tell the tale of this thing called ‘life’—I don’t imagine
he’d tell it much better, but the old raggedy bastard looks like he’d
spare me the tired clichés—(him or the coffee beans).