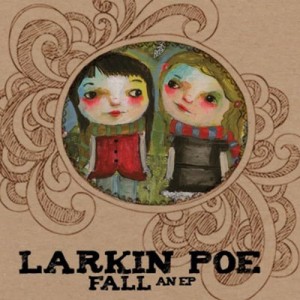 EP Review – Larkin Poe – Fall
by Ben Macnair
DEFPIG Records – 4 out of 5
‘Fall’ is one of two recent EP’s released by Larkin Poe, and is a sister-release to ‘Winter’. Fall contains six tracks that are taken from sources ranging from ambient rock tracks, to the alt-country groove of opener ‘Memories’ to the brooding slow bluegrass of ‘Horseshoes and Hand Grenades’. The group, led by the Lovell sisters features the Dobro and Lapsteel guitar of Megan Lovell to the fore, with support from her mandolin playing sibling Rebecca, and the usual band line up of guitar, bass and drums. ‘Just in case’ is one of those catchy rock tracks, whilst ‘Spooked’ is a love ballad of sorts, with Mandolin to the fore, and filigree piano patterns. In all this is another quality release from Larkin Poe although I do have to wonder why ‘Fall’and ‘Winter’ were released as two E.Ps, when they both add up to a very fine album of quality writing, musicianship and originality.
CD Review – Larkin Poe – Winter – 2 DEFPIG Records
4 out of 5
Winter is one of two EP’s recently released by Larkin Poe. It contains 7 songs that are high in atmosphere, due in part to the band’s line-up, and also the closely weaved vocals of the songwriters, Singers and Sisters Rebecca and Megan Lovell, who have sprung from the acclaimed family band The Lovell Sisters. There are elements of many different bands here, from the harmony vocals that bring to mind Stevie Nicks, and a tight knit band aesthetic that weaves narrative song-writing into a rich sonic tapestry of Mandolin, Piano, Dobro, Lap Steel Guitar, Bass, Banjo, Electric guitars, and powerhouse drumming. Although they have a Magpie like way of borrowing other peoples ideas, from the Band like energy of ‘Free Like a Bird’ to the Lo-Fi soundscapes and Kaki King like ‘Cure for the Common Cold’ and the light reggae groove of ‘Word from the Wise’ they have a sound and style of their own, and for sisters just on the cusp of their twenties, this is a release that sho
ws a lot of promise.