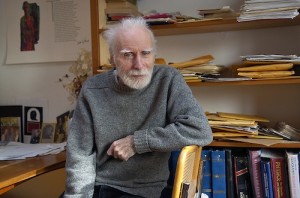 Jack Gilbert lived a life as fierce and unconventional as his poetry. The poet died in a Berkeley nursing home after a prolonged battle with dementia. He was 87.
Gilbert didn’t condone small talk. He was as serious in his personal life as he was in his poetry — pursuing deep meaning with his friends and in his writing.
“He would say things like ‘So how many times have you been loved? How did you know you were in love? What do you want to do with your life?’” said friend and fellow Bay Area poet Larry Felson. “You were immediately kind of lifted into a different sphere by Jack.”
The poet, born in Pittsburgh in 1925, earned a bachelor’s degree from the University of Pittsburgh and a master’s degree from San Francisco State University. Known for his focus on classic themes and unabashed prose, Gilbert found fame early in his career after his first book of poems, Views of Jeopardy, was nominated for a Pulitzer Prize and won the Yale Younger Poets award in 1962.
But Gilbert valued his art much more than the fame that came with it, and spent much of his career running from notoriety. He wasn’t an academic, and though he lived in San Francisco in the 1950s, he was not a member of the growing Beat Generation either. Instead, he worked within his own poetic framework and was admired both by fellow artists and everyday readers.
He published five collections of poetry in his literary career of over half a century.

Read the full article here.
How to Love the Dead
She lives, the bird says, and means nothing
silly. She is dead and available,
the fox says, knowing about the spirits.
Not the picture at the funeral,
not the object of grieving. She is dead
and you can have that, he says. If you can
love without politeness or delicacy,
the fox says, love her with your wolf heart.
As the dead are to be desired.
Not the way long marriages are,
nothing happening again and again.
Not in the woods or the fields.
Not in the cities. The painful love of being
permanently unhoused. Not the color, but the stain.
-Jack Gilbert (1925-2012)