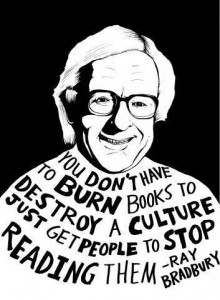 The intersection of 5th and Flower streets in downtown Los Angeles was designated Ray Bradbury Square by city officials Thursday.
But a better description might be “the intersection of imagination and inspiration,” author and producer Steven Paul Leiva told fans of the noted writer who died in June at age 91.
The location, near the front entrance to the Central Library, is a fitting place to honor the author of “The Illustrated Man” and “The Martian Chronicles” because Bradbury was a lifelong supporter of libraries and wrote his early short stories and novels on library typewriters that were available to the public.
“Bradbury couldn’t afford to go to college so he went to the public library instead,” city Librarian John Szabo told a crowd of more than 100 on hand for the unveiling of the intersection’s new signs. “He said he graduated at age 28 from the library.”
Read the entire article from B. Pool here.