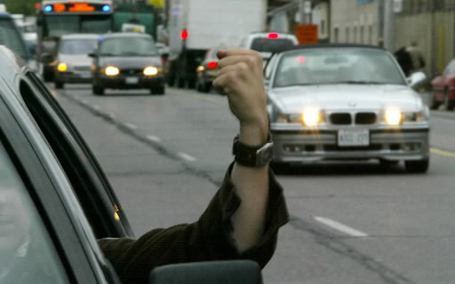 Showtime
by Tom Mahony
“Thanks, asswipe,” he grumbled, clutching the steering wheel and scowling at the driver puttering and weaving ahead of him. “Take two lanes instead of one. Christ.”
“Shh,” his wife said, glancing toward the back seat. “The twins will hear you.”
“They’ve got to learn sometime.”
“Learn what? Impatience? Road rage?”
“Proper driving technique.”
“They’re three.”
“The world’s getting more complicated,” he said. “Technology and the new math are changing everything. Never too young to learn.”
“Or too old?”
He passed the car. The driver yelled obscenities and flipped him the bird.
Showtime.
As he raised his hand to reciprocate, he saw his wife and kids staring at him. His finger had started its inexorable and well-practiced movement into position. The kids munched pretzels and watched him like a cartoon.
He grudgingly retracted his finger, clenched his teeth, and completed the pass. His wife turned on the DVD player. The Wiggles sang about some big red car.
“Showtime,” he muttered.