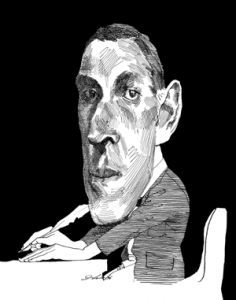 “Literary Composition” by H.P. Lovecraft
(First published in the January, 1920 issue of The United Amateur)
In a former article our readers have been shewn the fundamental sources of literary inspiration, and the leading prerequisites to expression. It remains to furnish hints concerning expression itself; its forms, customs, and technicalities, in order that the young writer may lose nothing of force or charm in presenting his ideas to the public.
Grammar
A review of the elements of English grammar would be foreign to the purpose of this department. The subject is one taught in all common schools, and may be presumed to be understood by every aspirant to authorship. It is necessary, however, to caution the beginner to keep a reliable grammar and dictionary always beside him, that he may avoid in his compositions the frequent errors which imperceptibly corrupt even the purest ordinary speech. As a general rule, it is well to give close critical scrutiny to all colloquial phrases and expressions of doubtful parsing, as well as to all words and usages which have a strained or unfamiliar sound. The human memory is not to be trusted too far, and most minds harbour a considerable number of slight linguistic faults and inelegancies picked up from random discourse or from the pages of newspapers, magazines, and popular modern books.
Types of Mistakes
Most of the mistakes of young authors, aside from those gross violations of syntax which ordinary education corrects, may perhaps be enumerated as follows.
(1) Erroneous plurals of nouns, as vallies or echos.
(2) Barbarous compound nouns, as viewpoint or upkeep.
(3) Want of correspondence in number between noun and verb where the two are widely separated or the construction involved.
(4) Ambiguous use of pronouns.
(5) Erroneous case of pronouns, as whom for who, and vice versa, or phrases like “between you and I,” or “Let we who are loyal, act promptly.”
(6) Erroneous use of shall and will, and of other auxiliary verbs.
(7) Use of intransitive for transitive verbs, as “he was graduated from college,” or vice versa, as “he ingratiated with the tyrant.”
(8) Use of nouns for verbs, as “he motored to Boston,” or “he voiced a protest.”
(9) Errors in moods and tenses of verbs, as “If I was he, I should do otherwise,” or “He said the earth was round.”
(10) The split infinitive, as “to calmly glide.”
(11) The erroneous perfect infinitive, as “Last week I expected to have met you.”
(12) False verb-forms, as “I pled with him.”
(13) Use of like for as, as “I strive to write like Pope wrote.”
(14) Misuse of prepositions, as “The gift was bestowed to an unworthy object,” or “The gold was divided between the five men.”
(15) The superfluous conjunction, as “I wish for you to do this.”
(16) Use of words in wrong senses, as “The book greatly intrigued me,” “Leave me take this,” “He was obsessed with the idea,” or “He is a meticulous writer.”
(17) Erroneous use of non-Anglicised foreign forms, as “a strange phenomena,” or “two stratas of clouds.”
(18) Use of false or unauthorized words, as burglarize or supremest.
(19) Errors of taste, including vulgarisms, pompousness, repetition, vagueness, ambiguousness, colloquialism, bathos, bombast, pleonasm, tautology, harshness, mixed metaphor, and every sort of rhetorical awkwardness.
(20) Errors of spelling and punctuation, and confusion of forms such as that which leads many to place an apostrophe in the possessive pronoun its.
Of all blunders, there is hardly one which might not be avoided through diligent study of simple textbooks on grammar and rhetoric, intelligent perusal of the best authors, and care and forethought in composition. Almost no excuse exists for their persistent occurrence, since the sources of correction are so numerous and so available. Many of the popular manuals of good English are extremely useful, especially to persons whose reading is not as yet extensive; but such works sometimes err in being too pedantically precise and formal. For correct writing, the cultivation of patience and mental accuracy is essential. Throughout the young author’s period of apprenticeship, he must keep reliable dictionaries and textbooks at his elbow; eschewing as far as possible that hasty extemporaneous manner of writing which is the privilege of more advanced students. He must take no popular usage for granted, nor must he ever hesitate, in case of doubt, to fall back on the authority of his books.

0 thoughts on “Lovecraft's advice to writers of the 20's”