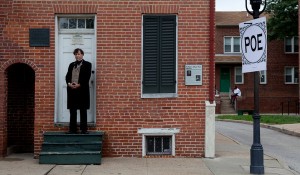 A Quick Look at Baltimore’s Treatment of the Poe House
From the look of it, even book nerds are being drawn to this year’s Super Bowl, with the second-time appearance of the Ravens, America’s only football team named after a poem, Edgar Allan Poe’s “The Raven.” For many in the literary crowd, there may be no better team to root for, because there’s nothing more surprising than an American sports team paying homage to a literary icon.
There are many layers to the Ravens’ literary allusion. There’s the fact that the team’s mascot is a collective of three black ravens respectively named Edgar, Allan and Poe. There’s the fact that the Ravens play less than a mile down the street from where Edgar Allan Poe is buried at Westminster Burial Ground. Then there’s the uncomfortable knowledge that the Ravens’ star player, Ray Lewis, was implicated in a double murder. Not to make light of murder, but on a team named after America’s first star horror writer, in a city where they peddle little Eddie Poe dolls next to Ravens’ jerseys in gift shops, it seems apro-Poe.
At first, my response as a voracious reader and Edgar Allan Poe fan with absolutely no interest in football is to join others in delight of this piece of barely literary trivia. But this year there is something unsettling in the Ravens’ appropriation of Poe and his poem for what has been a surprisingly strong and fast brand building of a football empire. This year, Edgar Allan Poe’s own association with Baltimore is threatened: The city unceremoniously closed the Edgar Allan Poe House at the end of September 2012 and laid off the Poe house’s longtime director, Jeff Jerome, who has successfully operated the house on a shoestring budget, in a dangerous part of town, keeping it open and safe to visitors for decades. Not long after the Poe House closed, it was vandalized.
Edgar Allan Poe’s own star in Charm City shone brightly until recently. In 2009, Poe’s bicentennial year, the Baltimore Poe House celebrated with events all year, including a funeral on the anniversary of Poe’s death. A faux Poe body was carried in a horse-drawn carriage from his preserved historic home in West Baltimore’s aptly named Poe Homes to his burial grounds, where they gave him a funeral attended by hundreds in Westminster Hall. When Poe died the first time around, the literary community largely snubbed him. So in 2009, Baltimore Poe fans were rewriting history. They were also successfully drawing national attention to Baltimore’s literary heritage, and protecting their claim to Poe from the other cities up and down the East Coast (Richmond, Philadelphia and Boston, to name three), who also fight for a piece of Poe’s legacy.
Read the entire article here.