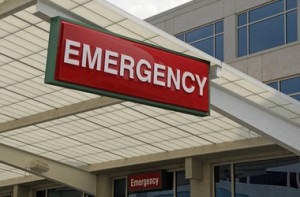 “Just another all-night Monday, except for the moon, the muffin, the coffee, and me at the ER”
by Steve Hellyard Swartz
passing the guy moaning, running his hands through his disheveled gray hair
the guy sitting near the guy in the puffy parka who is dabbing at his runny nose with a sheet of hard brown paper towel, mumbling about de-tox, passing the guys with black Mohawks holding hands with their girl friends, everybody in black with black running make-up and very, very skinny black jeaned legs, me passing the male cop and the female cop, the June and Ward of Monday night at two a.m. in the Emergency Room of St. Peter’s Hospital on New Scotland Avenue, the hospital where my daughter was born and my father died, me passing the tv that is as neglected as the husband of the wife who lies on her side and groans, me passing the CSI or NCIS or Criminal Minds or one of the Law and Orders, and the bag of chips and sandwich in a Ziploc bag on the desk of the admitting clerk, who is typing as a young woman in sweatpants and a hoodie hugs herself and cries that she has had a migraine for five nights and she doesn’t know what to do
me pacing, me sitting, me laying down, me telling everyone that I haven’t done anything wrong, only not saying that, but wanting to, me saying that all I ate was this apple, and then I passed out, a poison apple, is life a fairy tale after all, and I wake up, I wake up, you see, and this apple has re-formed itself just below where my heart should be, so I wake up my wife, and she says it’s okay, it’s probably okay, but I tell her I’ve been online and an apple feeling, the feeling of an apple whole in your chest, just below the breastbone, an apple riding your organs like Booker T is a possible surefire sign of heart attack, so I kiss her goodbye, on the night after the day of Valentine’s Day, I kiss her goodbye, and when one does that, when one kisses someone goodbye the way I kissed her, her on the stairs, her legs bare even though our house is very very cold, one cannot, cannot help but think this might be the last time I ever see you me x-rayed and hooked up to m
achines and poked and stamped and wheeled to imaging where a nice man jells me up like the big royal gefilte fish I am so he can ultrasound my liver and gall bladder and kidneys, then wheel me back to the ER, where I sit some more, lay some more, wee some more, get the good news that everything seems fine, no spicy foods for a few days, just watch yourself, come back if you need to, as the man with the grey hair out in the hall, the man I’d passed on the way in, is being asked: Where do you spend your nights? I mean – when you’re not here? Do you – sleep inside?
Me driving the full moon a thought bubble above me the whole way towards home, going west, a young man, me, a young man still, with golden thoughts of treated and released, a royal gefilte fish caught and released, traveling west on Western Ave towards home, me who can’t go home, it’s four-thirty and I don’t want to, me watching the moon as it flees the supermall on Western, returning on its slow successful criminal stroll away from commerce and oblivion to its rightful place on its hammock strung between stars, its rightful place as chief hoohah on the celestial dole, me loving life too much to go home just yet, me stopping at the Dunkin Donuts in The Star Plaza on Western, where it’s just me and the night guy, the night guy who is nice beyond nice, who brews me a new pot of decaf, who tells me that there’s a special that will save me fifty cents on a coffee and muffin, which I go for, of course I go for, this is America, this has been America, this night, this nig
ht has been America, this night that the apple elbowed my slim heart aside and cried, Life in America is for the fat, so scat, and then I’m sitting and looking out at Western and the moon, which the night guy claims he can’t see, so come a little closer, come here, but he doesn’t, he just stays behind the counter and talks sweetly about his wife and his little kids and his mother in a nursing home and his father who used to be big at the State, so it’s just the moon and me and muffin make three, then three guys come in, three regulars, three guys the night guy knows, he knows their orders and again I’m crying in my coffee about this being America, this being America, early and night-hugging, full moon and hot coffee and sweet tired souls, and the guys sit near me, they sit right behind me and me who hates to be crowded is jubilant, jubilant to have their company, just to feel the cold they brought in from outside going like cheese on a burger with the warmth of the
coffee in the large happy Styrofoam cup in my hands, and the guys who work together but who still sound surprised at the basic simple facts of each other’s lives, the guys who are nice enough, for a few minutes, to listen attentively, to some of my sweeter lies

0 thoughts on “Just another all-night Monday”