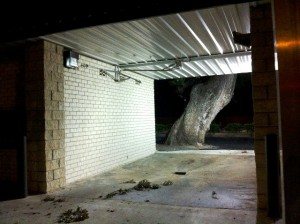 Burnt Offerings
by Dirk Michener
Another storm was about to hit Cape Scarry. The second storm this week. None of the other towns seemed to be catching any of these storms. This was not unusual for Cape Scarry. Every time a storm hit, someone in town got killed. The sheriff said it was because of all the debris flying around and wind and people out on boats screwing around and dudes hanging out on their roofs or cleaning their shotguns and they accidentally go off or old men having storm-related heart attacks, kids digging holes out on the beaches and what-not. Just a general kind of recklessness amongst the townsfolk. Nobody in town knew much about each other. They mostly just figured that any one of them might be the next one to get killed during the next storm and why would you want to make friends with someone who might be about to die.