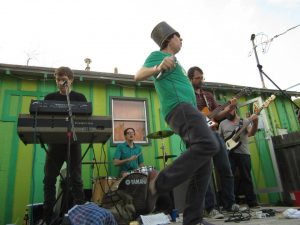 Only Use Crystal
by Pat A Physics
I only use crystal when I drink, but last night all of my crystal was shattered.
It was a high “G” that did it. Who knew that my purchase at RPM would
set me back like this. Sweeping the shelves with a miniature brush, I hum
the tune to myself with a little chuckle at the end of each phrase. What a racket!
My head is slightly damaged from a fall I took in the basement this morning.
It knocked out an ear weavil, I think. The plastic cup next to my head sent me
backwards in time to the instant at which it happened. There I was poised,
my right hand on the mantle. Looking toward my rock-stuffed, brown goat
with true affection welling up in my eyes. And then Matilda screeched about
her lost complexion and her nervy wart, ta dum, ta dum, ta dum dum de dum!
Oh, it was a beautiful last moment. We all have a bunch of them, all angular,
pivitol, precarious and so on. Remember the Alamo, carpe diem, ce la vie,
et cetera… but, now, no crystal. The grace that held me and my fragile shaft
aloft has burst with the excesses our privilege rightfully bestowed upon us.
Shaking in just my boxers, I whimper for toast, a toast, a small toast so very
early in the morning. Early enough that if one was as disoriented as I, it may
be presumed to be late, and the hours to be wee. Therefore, I ask for a toast.
Yes, I ask that crystal be delivered to my door and that we allow the passing
of spirits to culminate in a half moon of wonderous frivolity. Late, hah!
Early, pfft! Now, now, now. Do the thing that gods prefer us to do, friends.
My face is so close. My breath is heavy with drink and made up stories. Rain
hits the window at ninety degrees as the arc of a whistle through the gutters
sings a hellish siren. Shirts are spotted with cognac. Potted plants are swinging
off the porch. Grandma can not stop laughing. Curtains fall off the banister
on to the portrait of dear Gottfried. Obscured Gottfried! He used to unscrew
the light bulbs when the clock struck ten. My electricity, he said, is not for free.
I remember that there was a lord living in the basement once. He also would
only use crystal. When Gottfried took his lights, he used a green light bulb.
He would paint pink paintings down there. They were all obscene. The lord
claimed that it was a hobby, but he shopped them at the guild. And they told
him how bad they were. What a terrible, horrible transaction. Let us sing
about the nudie paintings. More crystal, I want to emulate that lord and have
you model for me. All of you beauties, you undiscovered butterflies, all
wrapped up like prudish larvae. All wrapped up in yourselves with no crystal!

0 thoughts on “Only Use Crystal”