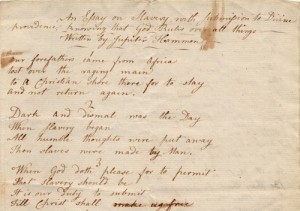 University of Texas Student Finds New Work By First Published African-American Poet
It’s the handwriting that stands out to Cedrick May.
As an associate professor of English at the University of Texas, Arlington, he assigned his doctoral students to find some of the known works by Jupiter Hammon, the first published African-American poet. Hammon’s works date back to 1760.
What one student ended up finding was a previously unpublished piece by the poet that shows how deeply he thought about slavery and religion.
“He’s defining slavery as sin for the first time,” says May. ” … He’s defying the idea that you can have slavery and be Christian at the same time.”
But Hammon’s handwriting — which, according to May, was better than his masters’ — along with the watermarks and smudges are what make this document special. “To hold it,” says May, “was quite an emotional experience in many ways, because this is a part of our collective cultural history as Americans.”
Click here to watch the video at NPR.