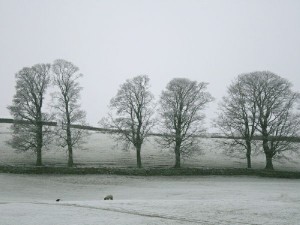 Bare Trees
by Janet Yung
The last leaf dropped from the ash tree in the back yard, grass and flower beds under deep cover from the tree’s debris. Last week, before the rains came, the tree had been full. It was only this morning as recent storms moved through the branches were made bare, a large bird which could only be a hawk perched on the highest branch surveying the wasteland left in the storm‘s wake.
Standing by the window, Susan shivered from the chill in the air and the memory of the brief encounter. Not knowing what to say on spotting him headed in her direction, she turned quickly in retreat, her heart racing. She couldn’t remember the last time they’d bumped into each other, but tonight was not the night for reminiscing, talking lightly about all that had transpired between the two of them.
She pressed against the display window, intently studying the eclectic arrangement of vases and knick knacks offered, hoping he wouldn’t notice the tired looking woman in the worn jacket. An old coat she’d thrown on against the wind going out to pick up something for her dinner. A flutter of activity behind her on the sidewalk and she looked up to see a crowd of young people reflected in the glass, her own image almost fading in the dark.
Their laughter drifted down the street and she prepared to continue on her way, thinking he must’ve made a turn leading him away from her direction.
She’d barely resumed her trek, when she heard a voice and for a moment, held her breath thinking he’d seen her and was calling out to her to stop. Prepared to smile, she looked up realizing as she did, he was not alone and was speaking to his companion, a younger, well dressed woman with a tinkling laugh filling up the chilly night air.
Then, they were passing each other on the sidewalk, the woman moved closer to him, allowing room on the sidewalk, lights streaming down, their features clear to each other. She parted her lips, about to say something when she noticed the blank expression on his face, glancing briefly in her direction, no sign of recognition.
She paused and watched their retreating forms, wondering if he didn’t remember her or only pretended not to, embarrassed to admit to his companion knowing someone as tired looking as she. She stood there till they were swallowed up in the dark and felt a lump rising in her throat, overwhelmed by the sadness of the encounter, inconsequential in the scheme of things and invisible to the rest of the world. It wasn’t that she cared, it was the loss of all her youthful hopes and ambitions, shattered along the path her life had taken.
Hearing footsteps and voices approaching, she sought the refuge of a doorway and, as tears began to well up in her eyes and stream down her face, waited to compose herself before she could step back into the light and resume her trip, knowing things would never be the same.