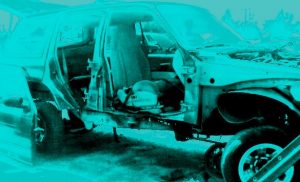 How to Pull a Driver’s Side Door off a Ford Explorer in a Junkyard after You’ve Fucked Your Life up (Part 2)
by Matt Ronquillo
“Here I am,” you’ll sing, “on the road again,” having commandeered your father’s truck while your driver’s license is still technically active. You’d drunk six cups of coffee for breakfast and took that solid advice from your uncle—the one who lives by the freeway in Lake Forest and drinks Keystone Light—and are taking a trip on the 405 into Long Beach to the Pick Your Part junkyard, which is doing a half-off deal today. Why are you doing this? Well, you need to get yourself a door for a 94 Ford Explorer and make it street legal again, baby, because that shit still runs!
Let’s go down the afternoon’s check list:

Here you come. Through the gates. In control. You’re good and jacked on caffeine with your eyes peeled, scanning long rows of beat up and stripped vehicles. Walking tall. Total fucking alpha. You realize you’re wearing sandals. This is contrary to the alpha dynamic, and thus unfortunate. But suddenly—
Hark!
What is it?
A Ford Explorer! With a driver’s side door!
Is it turquoise green, like the one I just crashed?
It’s orange!
Is there anybody else working on it?
A couple guys at the rear end!
Do they look OK?
I don’t know! They’re drinking!
Nose to the grindstone. Ratchet to the hinges. A good, solid hour working in the sun. Pull off the door. It worked! Onto the rolling flat cart with it then. Oh, that’s right. Flat carts that aide in the mobility of heavy objects are for pussies. Carry that door. And get ready now, as this is the home stretch where it all pays off, but it’s about to get tricky.
Life is not without its challenges. As it turns out, dehydration and cigarettes are not the proper prerequisites to a successful hundred yard carry of an SUV door/window combination. Now you can say you’ve tested that theory, and it didn’t work. No big deal. It’s ancient history. The good news is that by now, you’ve made it to the back of the line where everyone pays. The bad news is that it’s a long line and you’re going to throw up. Probably a lot. See sub-directions below.

1)       Sweat profusely and breathe heavily to make patron behind you uncomfortable enough that he/she takes steps away from you.

3)       Rush to front of line with your vehicle part(s) and interrupt current transaction by dropping part(s) down heavily.

5)       Disregard fresh excrement on floor while throwing up furiously.

6)       Exit toilet looking disheveled and insane as door closes with a loud bang behind you.

7)       Locate gap in line between the two junkyard patrons who look the most intimidated.

That feeling? It’s refreshment. You’ll be a little bit looser, a little less foggy. After one final push up to the front of the line, a lot more proud too, as you’ll be the owner of a Ford Explorer door of mismatched color. Remember though, when making the final transaction, don’t breathe into the face of the woman working behind the counter as you just vomited coffee into a portable shitter. She works at a junkyard. Life’s been hard enough on the ole gal.
The last thing you’ll need to do is drag your door on out to dad’s truck and then take it home. Your uncle will be waiting for you there. He’ll have already taken a second look at your Explorer and conducted a closer reassessment of the damage. It’ll have led him to the conclusion that whoops, the driver’s side door pillar was smashed in along with the door. See where the hinges are? There’s your problem.  It would take body work to fix that. Body work costs more than the Explorer is worth. And he’ll be laughing inappropriately. Really hard. Because you and you’re family are all really maladjusted.