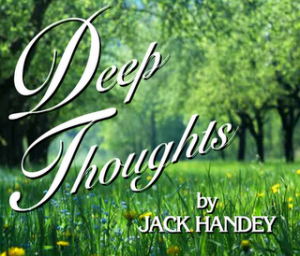 This past fall, while teaching poetry to undergraduates, I witnessed something of a literary tragedy. Each week, I asked a few students to read a contemporary literary journal of their choosing and present one poem that particularly struck them. An unmistakable pattern began to emerge. In the final week of the quarter, I voiced my discovery: “Have you guys noticed that you gravitate toward poems that are like ‘Deep Thoughts,’ by Jack Handey?
Crickets. Blank stares.
To a person, all the students were born in or after 1990; not one of them knew to whom I was referring. Therein lies the tragedy.
Fabricated though his name sounds, Jack Handey is a real person, an American humorist whose gently surreal one-liners and parodies of lyrical writing appeared most famously during interstitial segments titled “Deep Thoughts” on “Saturday Night Live” circa 1990. (More recently, Handey’s essays have been featured in the Shouts & Murmurs column of The New Yorker.)
“Deep Thoughts,” which were later collected in a series of popular volumes, were designed to satirize the genre of the feel-good affirmation. Examples include: “If trees could scream, would we be so cavalier about cutting them down? We might, if they screamed all the time, for no good reason.” And: “As the evening sun faded from a salmon color to a sort of flint gray, I thought back to the salmon I caught that morning, and how gray he was, and how I named him Flint.”
The wacky musings of an unhinged screwball, yes — but, I started to realize in that classroom, deceptively poetic as well. “Deep Thoughts” typically pair a keen observational eye with a declarative genius, a gift for the concrete utterance. Handey starts with a cliché, then both punctures and reanimates it through an ostensibly gauche and accidental surrealism. He also assaults the convention of poetic metaphor, as in the second example above — the gray salmon named Flint — revealing that a lot of allegedly “poetic” writing is a fraudulent and circular game: language that is supposed to evoke the natural world and put readers in touch with their inner being is in fact recycling its own trite conventions. “Deep Thoughts” breaks this sentimental and autophagous cycle and pushes the audience toward something new.

0 thoughts on “Poems that are like ‘Deep Thoughts,’ by Jack Handey”