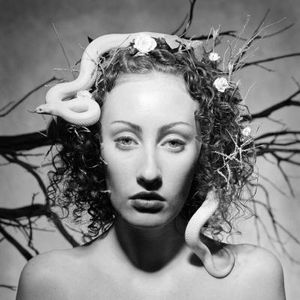 Professor Medusa
by Kendra Leonard
Medusa wakes and
wraps her hair, coiling the coils
under, blinding them.

Or at least that’s what the students think. I know, because
at least once a semester some kid tries to imagine my morning routine
for their final creative writing project, and the instructors like to show me.
It’s not too far off.
I have a nice set of turbans for everyday.
I could shave my head, but I’d look just as strange on campus.
Besides, the snakes take a while to grow back,
and they really itch while they do.
They only grow about four inches long,
like well-kept dreads.
I guess they are dreads, in a literal sense.
I like the peach turban best; it goes with my complexion well.
But the snakes are blind anyway.
Otherwise they’d be such a nuisance,
hissing at every butterfly or basketball player,
grabbing at things in the supermarket.
They’re just there to shock. Silly things. Stupid Athena.
I do have to cover my eyes.
In the 80s, I wore fashionable sunglasses:
Ray-Bans; they used to advertise
with vampires to lure in the goth crowd.
But then I found colored contacts worked,
and I could go swimming in them.
Mine are plain brown.
I get them on the internet,
since I can’t see an eye doctor.
Last Monday my class had to have The Talk:
what I have is a disability, not a superpower.
Students and I have this talk frequently.
It’s no secret who I am, I’m right there on the
faculty web page: Greek Language and Literature,
dual appointment with Anthropology.
Not a superhero. No superpowers. It’s a curse.
But then we have to talk about disability studies:
let’s not call it a curse, says one well-meaning
young woman. It’s just—Difference.
Where are you placing your accent? I ask, but she doesn’t get it.
Eventually they believe me.
My chair doesn’t really get it, but the dean does.
I want to get tenure here and stay,
so I have to work them both.
My chair does Latin American folklore.
He doesn’t want to think of the chupacabra as a dog
with a disability
or something.
So we avoid the issue.
My dean has a little crush on me,
I think. He always asks about my sisters,
what I’m doing on the weekend.
Grading, I say. Sometimes that’s even true.
But I also like to go out.
I go to the nightclubs where my students go,
and I watch them.
Keep an eye out, so to say.
Fine, if you have to ask.
That linebacker who left school last month?
He tried to rape a woman
majoring in economics in the
parking lot of the club on Maple Street.
The one downtown where the bouncer
does too much coke? Yeah, that one.
I was wearing sunglasses, I always do
when I’m out patrolling.
(Yeah, it sounds a little too Buffy to me, too.
But whatever.)
Well, what? Mr. Linebacker is still there.
They have a gravel parking lot, you know.
And my name does mean “protectress.”
They forget that part.
But I don’t.
She places each lens
into her lovely grey eyes,
and watches, guarding.