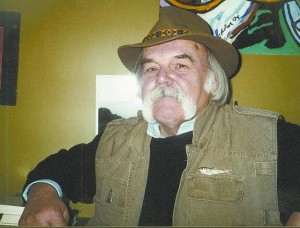 Norbert Blei (August 23, 1935- April 23, 2013) was an American writer. He wrote 17 books of non-fiction, fiction, poetry and essays. In 1994, he established Cross+Roads Press, dedicated to the publication of first chapbooks by poets, short story writers, novelists and artists.
Author, publisher and teacher Norbert Blei died early Tuesday morning at Scandia Village in Sister Bay, where he had been recuperating from recent surgery. He was 77.
A native of Chicago, Blei moved to Door County in 1969 and became a passionate defender of its natural beauty and rural character, working from a converted chicken coop studio in Ellison Bay.
He was the author of 17 books, including “Door Way: The People in the Landscape,” “Door Steps,” “Door to Door” and “Meditations on a Small Lake.” He established Cross+Roads Press in 1994 to support the work of local writers and poets.
His “Chronicles of a Rural Journalist in America” recounts the furor he created with a satirical piece in the Door Reminder called “Shut the Damn Door,” advocating for sealing off Northern Door’s natural splendor from tourists.
For three decades he taught writing workshops at The Clearing in Ellison Bay and was scheduled to return to the front of the class this summer.
Casperson Funeral Home in Sister Bay indicates that arrangements are pending.