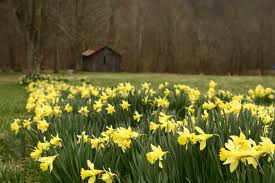 Aunt Hester
by Carol Smallwood
Having to leave the room of my own in Ithaca was difficult. I wanted to remain for the daffodils, to hear bees among the lilacs: even mosquitoes in Ithaca would’ve been special.
I knew that tightly closed tulips like Aunt Hester’s lips would soon be appearing on both sides of Uncle Walt’s drive. She planted them so precisely that as a child I used to connect them like dot-to-dot puzzles. I saw her life as a series of neatly written signs like: Cleanliness Is Next to Godliness; Prayer Is The Answer. But Uncle Walt had said that Aunt Hester had worn her dresses short when she was younger, and that it was her legs that’d first caught his eye.
It made sense. Aunt Hester was not who she purported to be. When she said “Jesus, Mary, Joseph!” her eye, the one not made of glass, should have been filled with devotion, with anticipated glory of the hereafter, but instead it reflected venom or at best pained forbearance. In the Catholic Girl’s Missal she gave me as child, it said we should think well of everyone, so I attributed it to the narrow high heels she said she wore as penance.
When she put her black rosaries down on the white dresser scarf, they made writhing snakes, letters of the alphabet, nooses; the rosaries with large crosses resembled anchors. Her worn black prayer books edged in red or gilt had braided ribbon markers, and holy cards of saints with hands folded in prayer or dripping blood from upraised palms; some cards only had prayers, ejaculations, or indulgences. When I started studying astronomy, I thought of the rings of Saturn when I saw a halo above the head of a saint.
My aunt’s numerous blond wigs made miniature straw stacks on her dresser. A picture of the Sacred Heart on the right side of the dresser showed God pointing to a large heart outside His body–or was He extending it in His hand? On the left was St. Anthony in Franciscan robe and sandals, whom she always evoked after losing something. There was a font of holy water under a bust of the Virgin Mary.
When she asked me if Jenny and Mark had been baptized and I told her they hadn’t, she intoned like a Cassandra, “They’ll go to hell.”
Aunt Hester gave me the girl’s missal when she returned from a Sacramentine retreat at Our Lady of Sorrows. She always returned from retreats with St. Anthony scapulars; Infant of Prague or the Virgin Mary statues; gilt-edged holy cards of the Lily of the Mohawk, Catherine Tekakwitha, were numerous. The thick gilt-edged book soon automatically opened to Living in a Vale of Tears, which was about the lives of martyred virgins, how to help fathers and husbands as heads of households, and how to live without impure thoughts. The duties and suffering of women as wives were heavily veiled in mystery, but I greedily gleaned as much as I could between the lines. I soon knew the section having the shortest indulgences giving the longest release from Purgatory. And I knew where the lists of venial and mortal sins were, and tried to figure out exactly when a venial sin became a mortal one which meant you could go to Hell if not confessed.
Excerpt from Lily’s Odyssey (print novel 2010) published with permission by All Things That Matter Press. Its first chapter was a finalist for the Eric Hoffer Award in Best New Writing.
Order it here.