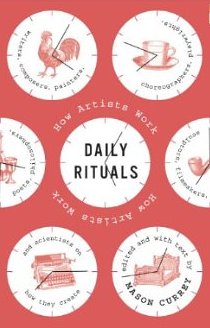 New Book Sheds Light on Writers Daily Lives
Hemingway wrote standing, Nabokov on index cards, Twain while puffing cigars, and Sitwell in an open coffin. Here’s an excerpt from the book Daily Rituals: How Artists Work by Mason Curry:
On a typical day in the last year of William Burroughs’s life he would awaken in the early morning and take his methadone (he became re-addicted to narcotics in New York in 1980, and was on a maintenance program the rest of his life) and then return to bed. If the day were Thursday, I would arrive at 8:00 A.M. to drive him to his clinic in Kansas City, or — after he had finally earned a biweekly pickup schedule — take him out to breakfast, so that his house could be cleaned. At about 9:30 A.M. on all other mornings William would arise and — in his slippers, pajamas, and dressing gown — make his breakfast, sometimes a salted soft-boiled egg with toast, or perhaps fresh-squeezed lemonade, and two cups of very sweet tea. Feeding his many cats at the beginning of each day took up considerable time, only after which would he shave and dress himself, by about noon.
William might have visitors at midday, or he might make an outing to his friend Fred Aldrich’s farm for some target shooting with other gun enthusiasts. Otherwise, he passed the afternoon looking through his gun magazines or reading an endless stream of books, sometimes works of serious fiction but more often in the category of pulp fiction, with an emphasis on medical thrillers, stories about police and gangsters, and — his favorite — science-fiction scenarios of plague ravaging the world.
[…]
William liked to go outside in the afternoon and walk in his garden, sometimes practicing throwing a knife into a board propped up against the little garage. But in his last year, he could usually be found lying down for an afternoon nap of an hour or two. One or more of his friends would arrive at 5:00 or 6:00 P.M. to join him for cocktails and make dinner. William’s daily cocktails — which had started religiously at 6:00 P.M. when I first met him in 1974 — now commenced at 3:30 sharp. After the first vodka-and-Coke and a few puffs on a joint, he often wrote in his new journal books until he was joined by his dinner companions.
[…]
In this last year William conserved his strength by “making an early evening of it,” sometimes starting to take off his shirt at 8:30 or 9:00 P.M. to signal his guests that they should move their fellowship elsewhere. During the night he was, by his own account, up out of bed many times to urinate or deal with cat exigencies. He often said he was a light sleeper, and until the middle of the night he was, but he usually slept soundly for several hours in the early morning hours, curled up on his side in a fetal position, his hands tucked between his thighs — and his pistol under the covers, not far from his hand, in case of trouble.
Buy the book here.