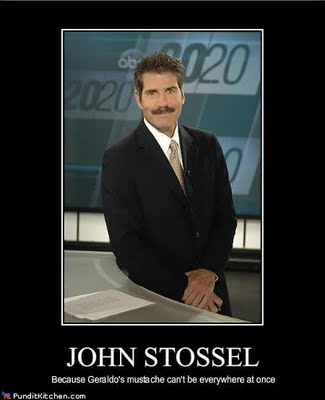 “Super Fly” Stossel
by Matt Crowley
Can anyone forget John Stossel’s infamous 1984 beat-down at the hands of a henchman of the World Wrestling Federation’s big boss Vince McMahon? (Actually I think almost everyone has, but let’s now vividly remember.)
One recent, bizarrely balmy late-winter Sunday afternoon at a Central Park beach volleyball court all nearby gawkers were given a juicy view of the celebrated television journalist’s uncovered and what appeared to be mildly firm, fully-formed pecs, nearly half a dozen of them, in flight here and there flopping all ’round as he darted to dive and dig and get a bit dirty, or sandy.
Stossel had alleged professional wrestling was a matter of professional fakery, and so McMahon was provided his motive. But my visions of Super Fly Six-Pack Stossel soaring through the air high above one of McMahon’s wrestling rings on his way toward a crushing, avenging body slam were not fake in the least.