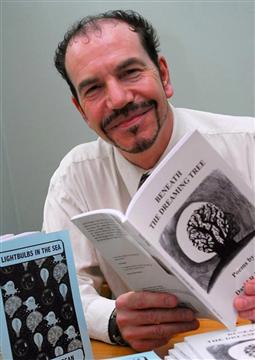 British poet David R. Morgan has been exposed as a plagiarist.
The poetry community is searching its soul after another case of multiple plagiarism emerged over the weekend.
Publishers and magazines have been working to take down poems and suspend sales of collections by David R Morgan after the American poet Charles O Hartman realised Morgan’s poem “Dead Wife Singing” was almost identical to his own, three-decades-old “A Little Song”.
Assiduous digging by the online poetry community, led by the poet and academic Ira Lightman, then discovered that Morgan, a British poet and teacher, had lifted lines and phrases from a host of different writers. One of Morgan’s poems, “Monkey Stops Whistling”, won him an award. Opening: “Stand to attention all the empty bottles, yes … // the long-necked beer bottles from the antique stores, / the wine bottles and pop bottles left on beaches; / steam off the labels and line the bottles up, the green ones / with the brown, black, yellow and clear ones,” it was found to be virtually identical to a 1981 poem by Colin Morton, “Empty Bottles”.
“When an American poet spotted his own poem under David R Morgan’s name on a website that blogs new work, he contacted its editor, and its editor contacted me. Within around one hour, I’d found a dozen more. Everything online by David R Morgan that I could find since Jan 2011 I could trace 90% of to another person’s poem,” said Lightman, who also discovered an alleged plagiarism of Roger McGough by Morgan dating back to 1982.
Read the entire article here.