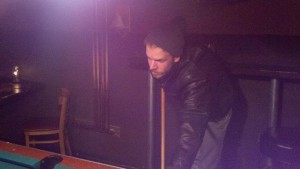 The Decadence of Music
By Thor Benson
I arrived by bus, and I became glad I had. Apparently the ride which had forgotten about me was at some point drenched in fungal regurgitation. The music was at a small saloon downtown, and the band had made the mistake of picking up a friend who had recently consumed exorbitant amounts of mushrooms and opium. When I arrived to the venue Joseph the guitarist, and Haste the drummer, were cleaning off the remnants of a terrible car ride.
“This looks like a good indicator of how the show will go,” I told them.
“He got vomit on my favorite fedora!” Joseph exclaimed.
“What’s a rock show without a little blood and vomit?” I asked.
We entered the bar, and I retreated to the smoking area after acquiring a brew. I drank with Haste and commenced the chain smoking. The opium head was babbling about flying creatures and explosions which were never to exist. The bar was full of a skittish noise which its inhabitants struggled not to release from their lips.
“There are a lot of weirdoes here tonight,” Haste stated.
“It’s not usually this way?”
“Point taken, it was like this the first time. I just need to focus on playing and forget what happened in the car, we’re going to scare the shit out of these people.”
“You’ll at least permanently damage their ears.”
Haste went for another beer without me, and I listened to a lost soul describe a situation which probably came from an acid flashback. He told the crowd about hitchhiking on his way to a mountain, and falling asleep under a shelter of tree branches. When he woke, he claimed, there was a beautiful naked woman with no face watching over him. It sounded like load of crap, but these burn outs tend to engage in their active imaginations heavily.
Once I couldn’t take the hallucination stories any longer I went to find Haste and Joseph again. I found Haste only half way to finding his beer, looming over a table where a man was playing 5-finger fillet with a pocket knife. Haste was making bets with the knife aficionado about how many times he could hit all the gaps between his fingers out of order without cutting himself. It turned out to be 12 times. Haste lost 20 dollars, but the other guy almost lost his ability to give directions, and the bartender cut him off in the non-literal sense. She was a young punk rock girl with dark eyes and a face that dared you to give her a reason to break your nose. The desperate men, and even the spirited ones, watched as her long firm legs marched around the bar.
“I’ll cut the rest of that finger off if you don’t put that fucking blade away!”
“You’d probably cut off more than that honey!”
“Don’t even try me!”
It was then time for the guys to perform, so Joseph took a double shot of whiskey and approached the stage. He stepped up to the microphone, scratched his wiry beard, adjusted his glasses, and simply said: “I don’t know about you people.” Then, as usual, the two of them made a point of being the loudest band of the evening, for better or worse. I was approached by an attractive petit girl I had once met, and she asked me if I wanted to dance.
“I’m not one for dancing,” I told her.
“How will I know you’d be any good in bed?”
“I guess you’ll have to live a little dangerously, and just take my word for it.”

0 thoughts on “The Decadence of Music”