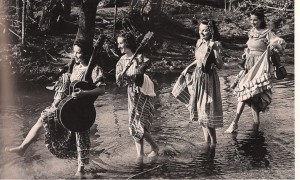 Chapter 8
from COUNTRY, a forthcoming novel
by SHELBY STEPHENSON
A banjo is the loudest drum strings numb.
Brother Brown played one: he’s a singer now:
real name?Marshall: I call him Brown, couldn’t
say Marshall: when I was a tot, “Marshall” came out
“Barty.” He was just enough older, a year and
seven days. An African-American lived on
“our place”: his name was Marshall Brown:
Fred Thomas Langdon lived across the field. His
nickname was “Thread.” Thread started calling
Marshall?“Brown”; when our mother walked
out on the porch to draw water from the well,
sometimes calling “Marsh…shallllll,” lingering a
yodel for that last abiding and echoing syllable,
Marshall Brown might appear; Mama started
calling her son, Marshall, “Brown”: the rest is a
restlessness, an indirect, path-o-slippery-reaching,
for Barty-Brown-William would play Daddy’s banjo, a
Leo Master, and one time, seventh grade, he played a
chapel program at Cleveland and the best
part?entertainment?turned out to be Leo Master’s
slipping bridge: Marshall would say in his
stage-voice?teacher coached him?“Seems like
my bridge wants to slip today”: how we boys
and girls in the audience giggled and sweated
too for the situation, wanting to raise him from the
moment to a position holding his years we could
hold on to: I mean the stories: Brown plays mandolin
some: started out on fiddle, a ten-dollar one we
went to Uncle Baldy’s to buy: the new naugahyde
on Daddy’s 3-quarter-ton ’37-Ford pickup
smelled up the Sunday we bounced over the dikes
down the lane to the house. Uncle Baldy’s
Grandpa William’s brother: Grandpa’s my father’s
father. Brown’s a whim-banging supremacy attired in a
brief of authority on musicians: says he’s got an
“image to uphold.” He puts it on and Image
disappears in a car, concentrating on carriage,
fictions and our disbelief: name “Marshall”
comes from Mama’s side of the family:
her father, Marshall Perry Johnson, tied a rope
around a mulberry limb there near St. Mary’s
Free Will Baptist Church, in Elevation Township,
looping part around his neck; Orby, his
wife, sent son Orron?Uncle Orron?twelve
years old, to check on him, thinking he was at the
hog-parlor: the boy saw his father dangling there:
Uncle Orron never married: I wonder about
that: Mama was six, waiting to go to school: the
year was 1913: my brother Brown’s a cranker-outer
of myths, “tells stories,” loves pawn shops: his
Mastertone Banjo? Where O where are you
tonight? At the Gold-N-Pawn? Think of these
connections: I wish I could venture into the lore
of the banjo, eschew the bad jokes, salute its ancient
lineage. “Banjar,” wrote Thomas Jefferson in
Notes on the State of Virginia: slaves
knew the difference and their descendants do,
too: maybe someone in Europe somewhere
played a “bandore” or maybe a troubadour in some
lost land crossed a drum with a set of wires and
got that sound we hear Scruggs play, that fifth
string blending in the plucked, ingenious, busy other
four: America’s popular: baseball’s big, football, and the
five-string: the four-string tenor’s especially good for
ragtime and jazz: I used to hear Uncle Dave Macon and
Grandpa Jones play their Fives when I was
knee-high to a dirt-dauber: Uncle Dave would
frail his banjo and kick that foot out,
wailing, “Lleven cent cotton, forty cent
meat, how in the world can a poor man eat!”
Macon and Jones played banjo before Bill Monroe
and the Bluegrass Boys came along; or Earl Scruggs,
Lester Flatt and the Foggy Mountain Boys;
Don Reno, Red Smiley and the Tennessee
Cut-ups; Ralph and Carter Stanley and the
Clinch Mountain Boys, and many others, including
interim, Pete Seeger during the folk-era: How the
strings fasten at the bottom of the head and
ride over that supporting bridge which provided
comedy for us in grade-school at Cleveland High!
“Bridge” is a wonderful word, isn’t it?
Country music may come and go, but the
bridge is here to stay: “Burning Bridges,” “Bridge
Over Troubled Water,” “Another Bridge to Burn”:
one of my favorite lines: “Darling, while you’re
busy burning bridges, burn one for me
if you get time.” “Does Forth Worth Ever
Cross Your Mind?” Entertain time where clusters
meet: the band-members tune their instruments: letters
rip from fans: I want to get lost in a rock?and roll: give
me beets to eat; then let me tell you “sun-thing”?you
got to have a microphone if you sing much with a banjo-picker!