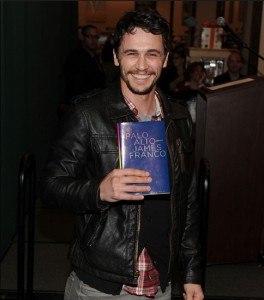 Franco asks for your donation to turn his book of stories into a film.

JF: In June 2011, I had the opportunity to publish my first book, Palo Alto. The book is a compilation of short fictional stories inspired by high school experiences and growing up in Palo Alto, California. For this project, I have invited the talented up and coming filmmakers Nina Ljeti, Vladimir Bourdeau, Bruce Thierry Cheung, and Gabrielle Demeestere to adapt and direct some of my short stories into three different feature films: Memoria, Killing Animals, and Yosemite.
WHAT WE NEED
Over the past 3 years I have directed and produced 6 feature films. I’ve also begun dedicating much of my time to teaching. Giving new filmmakers the opportunity to direct and produce films has become one of my greatest passions.
I strongly believe in this project and these visionary filmmakers. In order to cover all of the production expenses required to make these films a reality, we need to raise $500,000. This amount will be equally divided between the three films and all the profits earned from these films will be donated to “The Art of Elysium Industry Program”.
WHY I AM ASKING FOR YOUR SUPPORT
Finding the funding while still maintaining artistic integrity has been a constant challenge. Because of who I am, people often believe that it is easy to find investors and distributors for my films. Unfortunately, things aren’t that easy. More times than not, I have put in my own money to produce my films and my student’s films. However, this time it’s different; We need more funding, I will still fund part of it but I need of your help, filming three feature films back-to-back requires more funding than I can give.
EXCITING REWARDS
We are offering a multitude of awesome rewards to our Indiegogo backers. There are opportunities to visit set for a day, attend VIP premiere screenings, get a personalized video from me, and much more.
SPREAD THE WORD
Even if you cannot financially support our campaign, we would be grateful if you can help us spread the word on your favorite social media sites.
Watch the video and donate to the project here.

0 thoughts on “James Franco brings his book to film.”