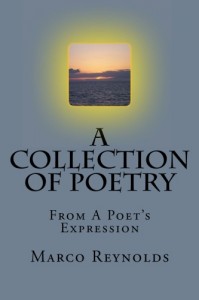 TWO DECADES OF POETRY CAPTURED IN ONE COLLECTION
Las Vegas, NV, June 11, 2013 – After graduating from a high school at risk of closing, completing college, and going on to begin his professional career, Marco Reynolds released his first collection of poetry; a project that has been nearly 20 years in the making.
It would seem as though Marco put his lifelong passion of writing on the back burner. He showed early interest in the art when he became involved with his high school newspaper and yearbook club. His aptitude and proficiency to capture moments through words was rewarded early on when he won an essay writing contest and had one of his poems published in a local newspaper as a tribute to his graduating class. Recognizing the financial struggle that many artists endure, Marco chose to pursue a career in the hospitality industry which would afford him the ability to continuing writing and gain the knowledge and experience to perfect his other passion, service to others.
While working toward his Bachelor of Arts in Hotel and Restaurant Administration at Oklahoma State University, Marco continued writing. His poems were so relevant that others began requesting copies of them. When he realized that his passion could produce a profit, he formed, A Poet’s Expression. Named after his favorite poem, the company aims to lead the market in art with poetry by featuring T-shirts, coffee mugs, bookmarks, books, and framed poetry with an artistic visual of the poem. The revenue from these unique gifts helped Marco fund a trip to New Orleans where he completed his required internship at the Hyatt Regency New Orleans – Superdome. As an avid learner, he also made time to take classes at Loyola Marymount University. Still writing, the desire to publish a book of his poetry became his ambition. However, after completing his studies, he went on to pursue his chosen career.
Marco considers his target audience to be those who have been given up on; those that relate to struggle and are not looking for a hand out but believe in hard work. What makes his collection of poetry unique is that it does not follow traditional forms. With no formal training, Marco Reynolds has written poetry for nearly 20 years. Prior to passing, one of his many inspirational mentors encouraged him to share his poetry. Today, his dream has come to fruition.
A Collection of Poetry by Marco Reynolds is now available online at Amazon.com, CreateSpace, and Lulu. 10% of all proceeds will be donated to combat illiteracy.
Find more info about the book here.