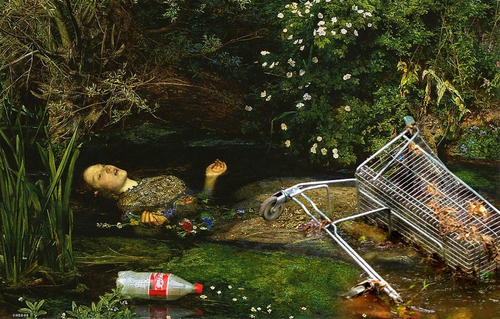 I Wish You Well on Your Transmigration; A Comparison of Two Poems by Cerebella
by Matt Ronquillo
There is an energy that resonates when a space-cadet poet like Haggard and Halloo’s notoriously strange “Cerebella” decides to write about universal issues that her peers can relate to. I’m not strictly talking about other poets when I say peers. I’m also talking about people who do not write, and who do not concern themselves with creating art for the sake of self expression, but who read poetry to enjoy it; who don’t feel the need to write it themselves.
Cerebella has recently done something that she rarely does. She has written about a common societal issue, and has done it with a kind of coherence that is not exactly a staple of her previous work. The result is a discernible step in the evolution of the writing of a deceptively lucid observer. First, consider her previous work:
“bacca bubbles manas”
To get a good look at what a unique perspective Cerebella brings, this poem is a great example of her “usual” form. It reads like what would happen if you made a cocktail out of a bunch of colorful shit you found underneath the kitchen sink, then glued a bunch of markers to your hands and feet, then did cartwheels all over your house.
Her writing often supplies twisted ethereal elements, and sometimes the poems are so far out that it becomes the kind of poetry that only other poets or writers could read and derive meaning from. This isn’t a bad thing; but­—
“calm down feminazi”
To realize how down to earth Cerebella can be, check out “calm down feminazi.” It uses imagery that is strange, but also very identifiable as male. If you’re a guy, hopefully you’ll recognize this combative satire that some women will impersonate when they want to rip into guys. She’s not wrong; the “masculinity” of men is used as a marketing tool for deodorant and beer and shit these days, and it’s a joke. This is what Cerebella often has a problem with; how this is affecting and manifesting in young men today.
Cerebella—and women like her—don’t hate men. They hate guys who don’t know how to be independent and who latch on to social stereotypes of masculinity that they saw on TV, and who then go parading this around in real life like it’s an identity. These themes, however, are coming from a writer who is often floating around stranger territories and not dabbling directly in such common issues like female/male relationships and gender roles. So you still get traces of her token bizarre attitude in “calm down feminazi,” but she stays on point.
Mainstream women writers who try to write on this topic will often lack the attitude and originality to appeal to the people they’re essentially annoyed by. They’re all preaching to the choir, while a man can relate to Cerebella’s poem. It’s gets the blood pumping, it talks justifiable shit, but it doesn’t take itself too seriously. Consider the title she chose. I don’t think she’s necessarily writing this as a woman, but more as an Earth observer.
Is Cerebella an alien among us? Probably. She’s called my creative non-fiction chauvinistic a good handful of times, but has also praised my stranger flash fiction pieces. She gives you a fair shot, and she really shines when she talks about things that we humans have to deal with on a day to day. The people of Earth should probably set up an Aliens Anonymous program to encourage her insight. And just like traditional A.A. meetings, our motto would be the same:
Keep coming back!

0 thoughts on “I Wish You Well on Your Transmigration; A Comparison of Two Poems by Cerebella”