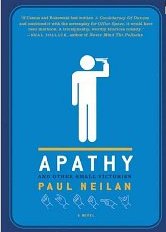 Review of Apathy and other Small Disasters by Paul Neilan
St Martin’s Griffin Publishing, ISBN 978 0 312 352196
Paper-back – 231 Pages
by Ben Macnair
“If Tolstoy were alive today and working as a temp at Panoptican Insurance, he’d say that all insurance companies are the same, then throw himself through an eighteenth story window and plunge to his death in a hail of glass and shattered dignity. I worked on the eighteenth floor, but the windows were too thick…”
Paul Neilan – the author of Apathy and other Small Victories is an heir apparent to the thrones of Charles Bukowski and Albert Camus. The novel takes the cynicism of youth, and mixes it with the well-worn plot line of lives in small offices, which has been used by everyone from Arthur Miller to Morrissey, Rick Gervias to Joshua Ferris.
Protagonist Shane is a blank canvas of a character, to which things seem to happen. He could be an older version of Holden Caulfield, but without the metaphorical safety net of Phoebe to keep him tethered to the ground, or even a less media savvy Vernon God Little. He is a borderline alcoholic who just seems to shuffle between one thing and another. He has no plans, and nothing to recommend him, no roots, and often sees life from the windows of a Grey-Hound Bus.
He falls into a job ordering files in an Insurance company, through links his girlfriend has, a woman who sees sex as a gladiatorial battle of wills rather than anything more intimate.
He has a girl’s bike and a helmet that does not fit instead of a car. He has an upstairs neighbour who walks a Guinea Pig, and solitary older figures in the pub, rather than Friends, and very little is mentioned of his family. Shane’s story is told, and seems to exist either in the present, or in the recent past. He pays his rent by sleeping with his landlord’s wife, and has a friendship with his dentist, and his assistant, Marlene, a character who we find out is dead right at the beginning of the book.
Shane tells his story in flash-back, going from his nervous habit of stealing Saltshakers, and waking up covered in Salt, ‘I was becoming Beef Jerky’ when two policemen, two clichéd and bumbling characters arrest him for the murder of Marlene.
Of course, it is never as easy as that, and Shane, with his nihilistic streak as wide as a river, and his lack of a history in the town has to prove to the police, and to himself that he is more than they think that he is.
Shane is dismissive of those whom he works with, with their forwarded emails, and ‘Inspiration Alley’ with it’s hackneyed phrases and images, trying to chivvy on the work force to bigger and better things. He is a believer in voluntary Euthanasia, hating the slow death that corporate life induces in those that drift, believing themselves to be suitable for more than this life has to offer.
The relationships that Shane has are often well drawn. There is the awkwardness in his inter-action with his Landlord’s Wife, his sweet and touching friendship with Marlene.
The story starts at a break-neck speed, and does not slow down for introspection or reflection. The denouement at the end of the book, where all loose ends are tied together seemed to be a bit rushed, and the explanations of the actions of some of the secondary characters also seemed tacked on. Nothing was probably resolved, and Shane is seen to profit from many of the happenings in the book.
He has a large redundancy cheque from a job that he never wanted, and would not miss, he has made no impact on his surroundings. It takes him about 5 minutes to pack his life into a bag, and catch the next bus going anywhere. The town and the people he met will forget all about him in minutes, and he says he will forget them even faster.
When one of his colleagues from the Insurance company dies, Shane sees the funeral as a chance to have an afternoon of, rather than honour the memory of some-one that he barely knew.
Although his actions and his rudderless existence seem in many cases to be morally reprehensible, it is this that makes him more believable. He is not the type of man who stands up to be counted, who does the right thing by people, he just struggles through life, and hopes that he still has some soul left at the end.
“Redemption is important. And, it is fun to be Christ-like, when the Circumstances fit”.
The book has whip-smart dialogue,and goes along at a pace that is completely fitting. For anybody that is living the 9-5 live of soul-less cubicles, coffee made from dust, and not enough time, and too many paper-clips, there is something to like and relate to in this book, but for anyone of a nervous disposition, it is probably better to try to stick to something lighter.