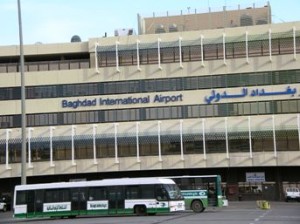 Escape with an unexpected, perspective-changing twist
by Kim Farleigh

I was waiting on the heat-softened asphalt of Baghdad Airport’s car park to catch a flight, heat concentrated on my earlobes and on the tip of my nose, heat hunting for new places to cause discomfort, heat like this never felt before.

The desert, like a yellow-brown hot plate on a giant stove, hazed the horizon, the haze reminding me of how I got so released from ego the day before that the world had blurred; transparent plasma, 1000 mega-pixel clear, had sharpened in its centre. Chemical lumps in my river veins had struck the floor and then had sky-rocketed, swirling, with frictionless acceleration, to my head, chemistry-recoil in cerebral explosions; men with covered faces, holding guns, had surrounded the car.

Time became a piece of eternity.

But the driver could talk. Maybe this freed us? Maybe it was because we were NGO workers? Maybe the driver had contacts in the resistance? I’ll never know.

A soldier was beside the departure-lounge door, his right arm pumping, sucking in as if trying to pull his cigarette’s butt out. His mahogany-bowl eyes, seemingly varnished with shimmering lacquer, seemed to be conducting electricity. His front-on-bird eyebrows, like hedge wings, flew as he said: “I slept two hours a night for months in a truck while we were taking Baghdad. Things then cooled down. Then it heated up again and now I hardly sleep again.”

The red in his eyes resembled blood-coloured blueprints for computer circuits. The sky resembled impenetrable cobalt. The desert shimmered to the farthest horizon I had ever seen, its vastness, and the sky’s, reducing me down to a dot.

He said: “Wind in palm trees is now like mortar rounds. Even the sand can now rise up and kill me.”

My mouth opened as if a rifle barrel had been stuck in there.

From the hangar next door, a space that scaled cathedrals down to sheds, emerged a guy who resembled scrubbed cactus, cut thorns packed on his rectangular head.

My dumb silence got engulfed by a space that made me feel like an ant.

By leaving I was avoiding accumulating uncertainty. Curiosity gives you the naive optimism to get you there; commonsense extracts you once information reaches overload; but to have no control over either…………..

At LA airport I bought a newspaper; information flew out of one of the pages as if a fact had mastered flight. The page became three, four; then five dimensions. Corporal Pedro Rodriquez killed by roadside bomb.

He died ten minutes after we met.

People dashed around before me like atoms of delusory purpose. Most of these people, I thought, wouldn’t have any idea of what hope or worry was.

Rodriquez could easily have been reading about me; for a long time nothing at home bothered me at all.

1 thought on “Escape with an unexpected, perspective-changing twist”