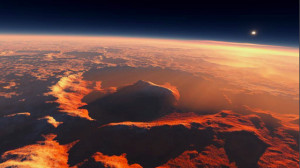 When NASA’s MAVEN (Mars Atmosphere and Volatile EvolutioN) spacecraft launches for Mars in November, it will carry more than 1,100 personal haikus from around the world.

People from all over the world submitted some 12,530 valid entries between May 1 and July 1. Public vote determined the top five winners—and a grand total of 39,100 votes were logged on the entries!

As a special recognition of the unique entries and the overwhelming response to the contest, all haiku receiving 2 votes or more will be saved to the DVD that will accompany MAVEN on its journey to and around the Red Planet.

It’s funny, they named
Mars after the God of War
Have a look at Earth
—Benedict Smith, United Kingdom

Stars in the blue sky
cheerfully observe the Earth
while we long for them
—Luisa Santoro, Italy

Mars, your secret is
unknown for humanity
we want to know you.
—Fanni Redenczki, Hungary