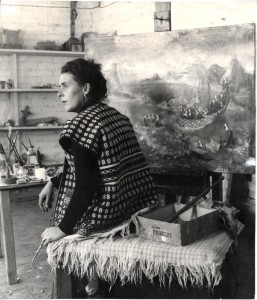 Carrington was born in England in 1917, the daughter of a wealthy industrialist, but lived most of her life in Mexico City, and wrote in English, French, and Spanish. A central figure of the avant-garde, her life was turbulent: she would suffer several breakdowns and more than one traumatic love affair. Yet, these experiences merely served as inspiration. At times, she acted as her own translator; on other occasions, her work was translated by others. Delving into her books in this day and age can be a confusing prospect, as some overlap exists between editions. Much of her short prose—almost all of it fiction—was collected in two editions published in the U.S. in 1988 by Dutton’s Obelisk imprint: The House of Fear: Notes From Down Below and The Seventh Horse and Other Tales. The House of Fear incorporates a short collection called The Oval Lady: Six Surreal Stories, first released in the U.S. in 1976 by Capra Press with an introduction by Gloria Orenstein; The Seventh Horse includes a shorter version of the novel The Stone Door. And this doesn’t take into account the collections of her work published in other languages, which don’t always correspond to the American editions.

Anonymous narrators are a recurring theme Carrington’s fiction. Many of her stories are narrated by an amorphous I: identified as neither male nor female, young nor old. In some stories, such as “Uncle Sam Carrington” and “The Neutral Man,” the narrator seems to share certain biographical details with Carrington herself. But even when the narrator seems familiar, the details are often surreal. In “Uncle Sam Carrington,” for instance, the narrator writes of encountering “a friend: the horse that, years later, would play an important part in my life.”

tumblr_llu5bdV1XC1qf0717o1_500When she chose to, Carrington could also make magnificent forays into the Gothic. The narrator of “White Rabbits,” curious about the habits of her neighbors, buries some meat; her neighbor then summons her, feeding the rotted meat to a hundred white rabbits. The neighbor’s skin is described as “dead white and [glittering] as though speckled with thousand of miniature stars.” Her husband, seemingly dead but warm, may well be Lazarus; the narrator’s neighbor also proves to be an almost evangelical advocate of leprosy.