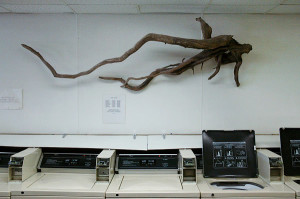 I drove to the 24-hour Laundromat in a soiled white tee and an old pair of sweatpants that rode well up my calves. It had to be past 2 a.m. because there were no cars parked outside of the theater and it was a weekend, but I had just finished a corny self-help book that told me that personal hygiene was step 1 to a healthy, fulfilling life. I personally didn’t give a fuck whether or not my work shirt had little blotches of coffee on it or if my blue jeans were losing their hue – I felt satisfied enough just getting dressed every morning to lug my sorry ass to that dusty, grey office building where my paycheck was held hostage each week. Dr. Whatshisfuck (the author), however, felt strongly that my mental stability rested on my ability to sort and fold colors and whites.

My pockets jingled from the mix of sheening coins that I grabbed from a jar on my drawer. The last time I did laundry I came up short for change and decided to hell with it all and left with a scowl plastered on my face, passing mothers and their kids fuming with detergents and synthetics soaps. Laundry, at that moment, seemed like a dreary feat accomplished only by the bored, middle-class housewives with time to perfect their numb art. It took a professional recommendation to get me to reconsider. Somehow – don’t ask me how – but somehow if you wake up to a clean house with clean clothes and look in your clean mirror and see a clean face with clean teeth, you begin to feel livelier and happier and more motivated to clean up the mental grime and clutter in your chemically imbalanced brain.

Making two or three trips seemed excessive so I loaded up my trunk with cardboard boxes of soiled shirts and drove down with enough coins to knock it all out. I brought a book I picked up the other day on Zen Buddhism, intending to find enlightenment between loads before sunrise. Maybe I would meditate, I mused; the quiet humming and vibrating of machines could be ideal white noise to keep my mind from wandering. But I didn’t even know how to mediate. All I knew was that thinking was against the rules and if you could stop yourself from thinking then you were doing it right. Was thinking about not thinking still thinking though? Fuck. Maybe I’d just read the paper instead, I decided.

At the Laundromat, I noted the peculiar way the neon sign flickered in a S.O.S. pattern. Migraine green lettering: 24/7 WASH N’ DRY. I parked at the curb and popped my trunk. It smelled a foul stench when they were put in the same small place. In my apartment, they were scattered like fall leaves everywhere from the half-kitchen to the bathroom so you didn’t smell it and, if you did, you blamed it on the smoggy air quality that day because they were indistinguishable sometimes.

The girl kept moaning softly to the rock of the washing machine, which kept swirling colors under her back. The guys took turns necking with her, sloppy tongues slushing back and forth; the whole scene was wet and slimy.

They saw me come in and looked at me in the eyes, still fucking the blonde without missing a beat. I think they expected me to leave by the way they turned back, but I stood catatonic with the door still ajar and a box of off-white shirts resting on my shoulder. It seemed natural to leave – not natural… polite. But my presence didn’t seem to faze them and there was work to be done – happiness only being accessible if my shirts were stainless and floral-scented. I had given up once and I did not intend on backing out simply because some people chose a public Laundromat for their quasi-orgy. No. I collected my boxes and walked across the room to a vacant machine parallel to the threesome.

Fortunately, I had just enough quarters to finish 3 loads. I purchased one of the disposable boxes of detergent and relearned the middle-class art of laundry-doing. Machines buzzed periodically, providing a sort of comic relief to the whole situation.

After thirty minutes, I finished my first load and, after forty, they finished theirs. I was in the middle of folding my only pair of dress pants when I heard the intense flesh-flapping cease and lend way to the simultaneous orgasm of three shameless hedonists. Hers sounded too good to be real, but it didn’t matter. They giggled and grabbed a towel from out of the dryer. I wondered if it was their towel and, if not, who would be the unfortunate recipient of that towel when they came in later today. It seemed perfectly plausible that this kind of thing happened more often than people might care to think and so I thought it might be wise to do laundry during the day just to be on the safe side from now on.

Then they dressed and lit cigarettes all around like it was a celebration. I became suddenly self-conscious. When the sex ended, they acted like normal humans, not phantoms. They had voices and words outside of the dirty talk utterances, which I failed to expect and which took me aback leaving me embarrassed at having stayed.

“Hey, man,” one of the Spanish guys said to me “did you enjoy the show?”

The brilliant, glowing blonde hopped off of the machine and walked up so close that I could smell the sex on her.

“People come here everyday,” she started, “and they spend money to wash their already clean clothes.” Her voice was raspy and alluring. “But what they’re really doing is buying time to do something to keep their minds off of their dull lives and to clean away the filthy, vile thoughts that they’re having all day long at their 9-5, white collar jobs.”

“That seems about right,” I added.

She smiled, very pleased with herself. “We fuck in a Laundromat because the world is a dirty, dirty place and you can’t clean it with heavy-duty detergents and dryer sheets.”