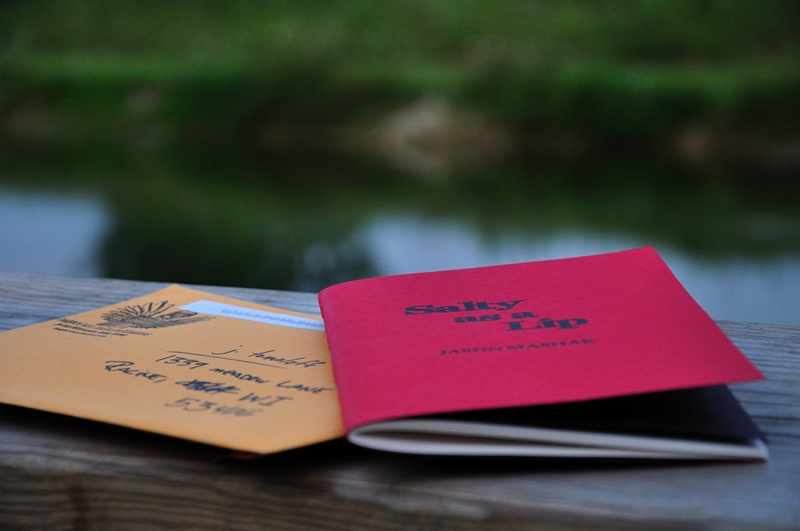 SOLD OUT!
Limited amount in first printing. Covers are hand printed on an 1890’s printing press for a rich black ink. Prices include shipping!

Early praise for Salty As A Lip:

“Jason Mashak’s SALTY AS A LIP is grounded in a voice patiently bridging the “steeples and ‘scrapers” of an inquisitive mind. The poems are at once syllogistic, hard-edged, satirical, reflective, and finally as playful as love notes. The true joy of this book is that we are deliciously engaged in a “pantomime of pleasure” which the language and imagery generously evoke. -James Ragan, Author of “The Hunger Wall” and “Too Long a Solitude”

“Makes me want to drink a bottle of champagne with the he and she in it and dance around in slinky silk dresses and high heels spilling intelligence all over.” -Joyce McMahon, poet/accordionist

“Mashakian: a principle based on civil disobedience and dissent without fear of repercussions or institutionalized policy. A thought process that draws from marginalized information within the static existence of normal discourse. As in, “at times of despair and frustration i realize that by referencing the mashakian principle i have the ability to defend myself against the status quo.” -Otto Esterle, writer/teacher of English literature

On “I Was Trained to See Shadows”: A nice bit of smooth, full-bodied, surreal story telling. I like it. -John Bennett, writer/publisher (Hcolom Press)

On “Salty As a Lip”: I liked/enjoyed this thoroughly. Its perceptions are fresh, well-conceived and well-rendered, and economical in its lyricism in a way that can be readily apprehended and felt. -Doug Marx, poet/curmudgeon-litcritic/musician

“I’d say that most of these are just straightforward enough, but not entirely explainable or attributable to a single cause/effect, which makes them the kind of poems I want to read many times… “Salty as a lip” is my favorite. It’s so alive: strange and human / earthy and raw. Mysterious but grounded. Mashak has manifested paradox, it seems. Bravo!” -Sage Cohen, poet/copywriter

JASON MASHAK (b. 1973) came from good Chicago immigrant stock to be raised in Hartford, Michigan, where he developed a fondness for black dirt, fresh fruit and veggies, ginormous lakes, extreme seasons, rock n roll, dad’s muscle cars, mom’s psych-101 textbook, and grandma’s encyclopedias. His teenage years were spent (perhaps wasted) in north Georgia, on backbreaking manual labor, from which he learned about life primarily from Vietnam-vet truck drivers and diesel mechanics. His pursuits in poetry were initially spawned by failed attempts with flirtatious-yet-rather-prudish women and at song lyrics for several bands (Liquid Velvet, Deacon Jones, The Steppers, and Seldomfence). Moving to Oregon in 1998, Mashak eventually forwent a sales cubicle in lieu of two certified bludgeonings to the head (cum laude) from Pepsi State University. Auspiciously, a few evergreen shamans and nymphs fostered his Great Awakening, after which he went into self-exile in late 2006. Since that time, Mashak has resided in Prague, Czech Republic, and is now a Reclusive Daddy to his Slovak-American baby girl. Salty As a Lip, his first book, was written and edited over the course of about seven years. Some of his writings not included in this book have appeared (or are forthcoming) in Alchemy, The Other Side of The Ragged Edge, Open Wide Magazine, GetUnderground, Oregon English Journal, The Refined Savage, Black Heart Magazine, Heavy Bear, and several other journals and anthologies. He welcomes energy exchange via Facebook.

A wise man sets cinnamon sticks
boiling on the stove

then has a long pear and doesn’t wipe
its clear blood from his chest.

He drags his favorite chair
to the back yard to watch

Junebugs flying ass to ass.
He cries at the beauty of this,

the liquor store’s a half mile walk
and it ends up being six fifths.