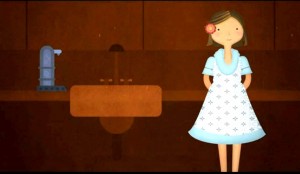 How Motionpoems, Rap Genius, APR Are Driving A Poetry Renaissance

Digital tools and platforms are driving young, hip readers and writers of poetry in ever increasing numbers to practice and appreciate the ancient art. Here’s a round up of four to watch.

The nonprofit releases one animated poem each month. Motionpoem’s Executive and Artistic Director, Todd Boss says the site is “going gangbusters.” The organization has been “concentrating on creating the model and delivering on extreme quality.” They’ve produced 40 so far.

Publishers partner with Motionpoems by “supplying us with a constant stream of poems that will be forthcoming titles of theirs,” explains Boss. ”We read what the publishers give us, we select down from there and deliver maybe three to five poems handpicked to deliver to a filmmaker we know is really interested in making a project for us.” The filmmaker chooses from this selection, or can ask for additional choices, until a match is made.

Rap Genius, a site that has reached 24.3 million uniques a month, according to the company’s report of Quantcast figures, has a community that carefully considers song lyrics by posting, commenting and annotating the text — and each other’s annotations. Just about 100 days ago, Rap Genius launched offshoots, including the literary Poetry Genius. And according to my recent interview with Poetry Genius Editor-in-Chief, Austin Allen, they have reached over 200,000 uniques a month.

Since the site is heavily populated by user generated content, Allen has a serious job in making the UGC helpful and flowing. “A lot of what I’m doing is reaching out to authors and publishers, trying to get them involved,” he explains. “I’m also doing a lot of on-the-ground editing. I’m not only approving or rejecting user annotations, but also finding new editors and moderators and to get more people involved both as authors and as regular users and scholars. It’s mainly a volunteer community, much like Wikipedia editors. So I’m trying to build up that community.” Poetry Genius, not surprisingly, has a real appeal for schools and teachers, and expects this to be an important source of audience.