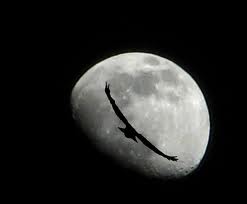 Fly Me to the Moon
by John Bennett

I’m about out of things to tell myself. Introverted secrets. Closely guarded misfortunes. Stamina stretched to the breaking point. Bread crumbs of hope. Fancy names for the guillotine. A beheading always draws a big crowd, like Sunday Mass at the Vatican.

People who don’t believe in God are obsessed with the thought of God. Everything gets canceled out by its opposite.

A work in progress. Connect the dots and there’s a kangaroo playing banjo. Or a mule mounting a gazelle. A Eucharist spinning thru space like a frisbee.

Fly me to the moon, they won’t follow. They’ll pretend it just never happened, this defiance of gravity. “Don’t be a fool,” they’ll say, “eat your cereal, tie your shoelaces, go to your room. There’s no man on the moon, have you been doing drugs again? The moon has acne, that’s what those pock marks are. Stop looking up. Bow your head.

Just another day in the toy factory. Reason strung out on happenstance. Designer miscalculations. I keep glancing at my watch to see time fly, and the second hand brays like a donkey.

If they’d been smart they would have barred me from language, but who could have foreseen the shit storm I’d cause? Still, I don’t have the power to change things, just besmirch them. Acid rain on their cockeyed parade.

Okay, I’ll be off now, unacknowledged except by small children who nudge each other and wink.