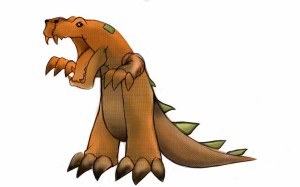 When he shoved his legs and arms inside, he became a dinosaur. The costume was only a hodgepodge of materials but his mother was a seamstress. Dyed scraps of burlap sack sewn to the underbelly made for convincing reptilian textures much like scales. His favorite part was the tail; thin and tubular like a cat’s tail, but with a ridge of felt spikes. His name was Dinapoli. Soon everyone called him Dino.

Prehensile skills were on display everywhere Dino went. Kids at the jungle gym marveled as he showed off, wildly swinging from his tail at impossible angles. His mother reinforced split seams with double stitching on her serger, but the costume wore thin at the knees and around the seat of the pants. No fabric could handle his growth spurts. Dino didn’t care. He dressed like a dinosaur every day despite the tatters. His mother begged him to dress like the other boys. So he cut holes in his blue jeans to wear the costume underneath with the tail sticking out.

Dino was in the bathtub when it happened. Wet footprints trailed in and out of every room – the costume was gone. He stood naked on the patio in the backyard screaming at the top of his lungs. His mother had cut up his dinosaur suit and set fire to it. He knocked the entire blazing trash can over when he grabbed the tail, and his mother didn’t have a choice but to put out the fire with a garden hose. He stood trembling, staring at her with an intensity she did not recognize. She tried to ease the singed tail from his grasp but he no longer trusted her with it.

He met her on the bench in front of the principal’s office. Dino was there about the tail being a distraction in class. She was clutching a pink referral for fighting. He admired her busted knuckles; the thin scabs that cracked when her fingers flexed as she caressed his tail. She admired his reptilian accessory. It had grown thick with sinewy muscle. Dino told her it tickled the way she touched him. The tail twitched and wrapped around her shoulders… Pulling her closer. When they called his full name to enter the office, she told him she liked it better, “Dinapoli sounds more sophisticated.” The principal was new to the school. Every time a new administrator became aware of the tail it became a pet project to get rid of it. Similar meetings yielded similar results. The tail stayed on. Later that day, he kissed a girl for the first time.

Curious kids tailed him wherever they went. Most parents seemed delighted as well, until they found out or realized for themselves that he wore it all the time. Even to bed. At the mall, it twitched and wagged behind Dinapoli as they window shopped lingerie. For a joke, he’d occasionally make it get stiff and erect. She liked being choked with the dinosaur tail during sex.

Dinapoli could have killed the guy; a slight constriction of the tail would have crushed his larynx. A twist would have popped his head right off. She screamed at him through streaming tears, naked on the balcony – sixteen floors up – serious that she would jump if he didn’t let her lover go. Dinapoli pleaded for a why. The tail was blamed. She had been the only girl he’d ever kissed, ever laughed with, ever cooked noodles with, ever cuddled with under a blanket on a rooftop, or thrown a snowball at, or loved.

The tail was a masterpiece of design perfected over a nineteen year span. The first flexing model had been simple and sturdy, with a brake cable stripped from his bicycle running along the inner length, down to a lever hidden in his right shoe. It wagged on cue just by shifting weight on and off his heel. Despite nearly failing high school, Dinapoli turned out to be a natural engineer. He instinctively understood how things should work. By his early teens, he was ripping apart the remote controlled cars he begged for every Christmas so he could install more servos into the tail. Deciding how to disguise their controls with subtle movements kept him tinkering at odd hours when he should have been studying. As a student, he argued it was research to benefit the disabled, and school faculty capitulated to the use of his reptilian appendage. With over a thousand points of remote control articulation, the newest model was one of the world’s most advanced robotic limbs. After he discovered her cheating on him, he stopped wearing it as often. When he did, it was usually for testing upgrades. They separated, moved to different states, and never spoke again. Dinapoli Parthenope got a job designing prosthetics. One drunken evening, the tail ended up in a scorched trashcan in the alley.

He chased the kid from behind the convenience store through a maze of brick buildings. The boy kept a half block ahead of him despite the dead weight of the dinosaur tail, but made a mistake… Mr. Parthenope cornered him at an intersection busy with traffic. He doubled back. As he shot past Mr. Parthenope, the tail was too easy a target to grab. It ripped free from worn-out straps holding it in place. Mr. Parthenope hoisted it by the tip as if posing with the catch-of- the-day. No doubt, it was the tail he’d discarded six years prior.

“Then why are you chasing me?”

“Because you ran!” He was out of breath, but forced himself to speak clearly. “I want to talk, that’s all. Honest.”

“What I want is to fix your tail up for you. Would you like that or not?”

The boy nodded yes, still wary of the suspicious offer, unwilling to move any closer.

“Well, tell you what. I’ll just leave it here with you to do as you please. And I’ll also leave a business card with my name and number on it. Go tell your mom and dad that I want to fix your dinosaur tail for you. This tail should be able to do all sorts of cool things, but it’s broken right now. So have your parents call me, understand? You don’t have to tell me your name or nothing about yourself, although I do hope to someday be friends.”

The boy didn’t know what to think of him.

He turned to leave when the kid shouted, “You better not be lying…”

Mr. Parthenope smiled back, still out of breath.