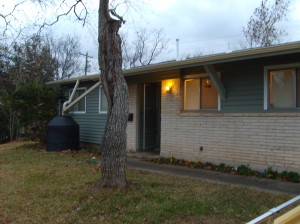 In this place, spirits dwell with the

living, whose lives are mended from small

broken pieces, a woman sits on a stoop

looks into the night sky, watches her

dreams transverse the universe. A man

sits on a porch strums a guitar, sings

to the moon only to applaud himself.

In the tasteless night air a man sits on

a bench conversing with himself as

a street preacher speaks to him, neither

listen to the other, as teenagers watch

their laughter mingle with useless words.

In the dank alley, he slithers among the

ductile, imparts his product along moss

covered bricks and pockets cash from their

clammy hands, watches as their lives

disappear in wafts rising into the darkness

She stands, leaves her dreams behind, climbs

into a car where a man gapes at her vacant

eyes tells her she is pretty. She smiles

blackened gums, toothless; he pulls her by

sparse hair into his lap. The man on the

porch sings one last song, sips a 40 and

falls asleep in front of boarded up windows.