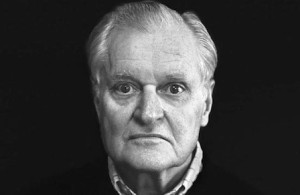 In a recent piece for Hazlitt, Chris Randle takes the opportunity to “gawk at” John Ashbery‘s possessions, even as the poetry of the famously “inscrutable elder” remains obscure. John Ashbery Collects: Poet Among Things, an exhibition showing at the Loretta Howard Gallery in Chelsea until November 2nd, displays the keepings of Ashbery’s home in Hudson, New York. The show’s curators, poets Adam Fitzgerald and Emily Skillings, took a number of pieces from Ashbery’s 19th-century house—“paintings, portraits, books, collages, furniture, toys, and a warping convex mirror,” Randle lists. The objects’ associations and meanings are left open: “There are stanzas alongside them on the walls, but the exhibition eschews crude X/Y associations to try to display a process stilled.”

The items included are not only Ashbery’s own ephemera; due to his prominence in the art and poetry worlds, the exhibition also cites works by Joe Brainard, Willem and Elaine de Kooning, Joseph Cornell, and Joan Mitchell, among others. Randle, though, loves the items most that seem most ordinary:

Felix the Cat toys. Postcards collaged together by Ashbery himself. The sturdy black typewriter he still composes all his verse on. A bookcase filled with admired antecedents (Henry Green, Ronald Firbank, The Spoils of Poynton), close friends (James Schuyler, who co-wrote Ashbery’s only novel A Nest of Ninnies, and Harry Matthews), and intriguing strangers (Marjorie Perloff’s The Futurist Moment).

These commonplace materials, too, are what I have enjoyed in artists’ collections. I loved, at Jane Austen’s house, a banister smoothed splinterless partly by her hands; in the Wallace Stevens Collection at the Beinecke Library at Yale, a leather billfold softly stamped with a gold WS. (The most useful part of Stevens’ collection at Yale, actually, was once literal junk: the donor, whose parents rented an apartment in Hartford to Stevens and his family, wrote that his mother would occasionally grab Stevens’ penciled pages from the trash can. These were the drafts that became Harmonium.)

Curators Fitzgerald and Skillings seem to feel the same. As Randle wrote,

It’s a genial, allusive, and frivolous collection, like many of [Ashbery’s] literary ones. The exhibition, which was curated by two younger poets, doesn’t even tag any items, let alone attempt to explain them in theoretical language. I peered at a glass desk several times before realizing that it belonged to the gallerists, not their guest. Like Ashbery’s sharp turns on an enjambment, they’ve made the quotidian disorienting.