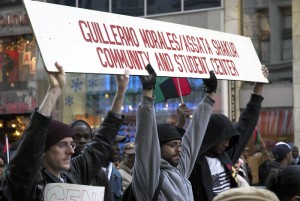 Thursdays With Assata
by DIY Danna

Raised hands everywhere, to get the waiter/assassin’s attention
in the balmy cafe, a cacophonous ring of a gunshot
disturbs talks of revolution, starting with the ring of smartphones
attached to bombs on televisions in living rooms.

I see her disgust at The Man,
who still thinks it’s a sin to feed, shelter and clothe the poor,
give free health care to the needy,
because it’s some kind of pinko plot.

She raises her fist to get attention,
ready for another Cuban coffee,
as I pause to ask her if she has read the latest book,
or seen the latest film about her life.

But the waiter with the silencer has shot a young man
who told him socialism was dead like Marx,
dead like Obamacare soon enough,
and that he wouldn’t tip for the tea and sympathy.

Assata didn’t applaud the waiter,
like the rest of the captive audience,
but asked him, “Why couldn’t you wait
until the man committed suicide in another Bay of Pigs?”

Everyone laughed at her bon mot,
but I thought it untimely inhumane,
until a group of capitalist economics professors held me hostage
at a lecture in Havana the next week.

(I can’t wait to tell her about this next Thursday, if I survive.)

for Guillermo Morales and Assata Shakur

8 thoughts on “Thursdays With Assata”