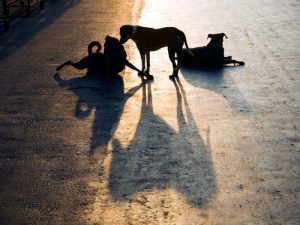 It was a good day to fleece treats off the customers coming out of the 7-11. The hot weather brought them in for beer and chips, and I sat outside pretending to be someone’s pet dog by sitting calmly and looking like I was waiting for my master to return from inside the store with a six-pack for him and a bone for me. Pet dogs were safe to feed. Moms didn’t have to worry about their kids trying to talk them into bringing home the stray. Don’t feed the stray, they’d say, he’ll follow us home. I’d heard that one a lot. So I put on my act of belonging to someone and it worked for me.

I’d tried to be a pet dog once, I even still wore the old collar my first family bought me, but the life didn’t take. According to the trainer my owners had brought in it was due to my lack of impulse control. What a load. It took more impulse control than he could ever muster to sit through his long-winded spiel about finding the right kind of treat to motivate me and him clicking that damn training clicker. Hey, click this! Find the right treat? What did they think I was trying to tell them by stealing all the food bits off the counter tops? How dense could they be when I’m stealing everything except the dry little biscuits they’re trying to “motivate” me with? My life might have turned out entirely different if those first owners of mine had shared their Triscuits and cheese instead of just stuffing their own mouths with them.

After a point I couldn’t make the effort anymore and one day they left open the gate in the backyard and I took myself for a walk and never went back. Sure, I’ve been through the system a few times since and there’s been attempts to re-home me, but this is the life for me, eating Ho Hos and scamming strangers. I know the drill when it comes to domestic life. Do this, do that, sit here, lie down over there. Oh, don’t do that! And after all that nonsense they trap you inside all day long with nothing new to do, day after day until your life has passed by and you’re off to the vet for the big shot. It isn’t worth the dry biscuits they try to give you in trade. Give me your love, they say. Give me your loyalty. In exchange I’ll give you this dry biscuit bought in bulk at Costco made in China of carcinogenic wood shavings and lock you inside all day long. And oh yeah, if I’m feeling energetic when I get home from work, I might walk you around the block. What a load. I was given the opportunity to be free and took it in an instant.

“Hey, Pimpster, want some Ho Hos?” asked one of the girls who was a regular on the strip. She shared everyday, like she was buying the Ho Hos as much for me as for herself. I wagged my tail and started to drool. Who knew I was such a sucker for sugary cakes?

She broke one in half and held it out to me. “Here you go, little man.”

I gobbled it in a second. She ate her half slowly and I waited for her to take the second one out of the package. When she did, she broke it in half, too. “More?”

She didn’t need to ask. I gobbled it, too.

“You know what? You’re looking kind of skinny.” She reached down and petted my sides. “I can feel your ribs through that mangy fur of yours. I tell you what, baby, if you’re still here later I’ll buy you a can of dog food.”

A car pulled up and she leaned in through the open passenger-side window to talk to the driver, then got in and they drove off. I went back to pretending to be someone’s pet, but eventually fell asleep. Later, her voice woke me.

“They didn’t have any dog food, except in the bag and I’m not feeding you a whole bag at once. You’d eat yourself to death.” She held a can in her hand. “But they had chili, and believe me, it looks just like dog food. Maybe even tastes the same. But my can opener is at home. You can follow me and I’ll get this opened for you.”

Once we got a block away from the strip the night was quiet and cool. It’s funny how when things are busy around you like me running my scam in front of 7-11 you think the whole world is like that, but then you walk a few blocks and it’s entirely different. We walked four blocks down a side street and then she opened the door to a basement apartment in an old house that smelled like the rhododendrons in front of it. I followed her inside and she opened the can, put it in a bowl and set it on the floor. It wasn’t bad, but I knew it would give me gas. She also put a bowl of water next to the chili and it tasted best of all after a long day in the sun.

She left the door open to air out the musky smell of cigarettes and sex, and I could leave anytime after I finished, but I didn’t particularly feel like going anywhere. That can of chili was like a lead brick in my gut, so I put my head down and closed my eyes for a moment. It felt good to rest in a quiet spot without any traffic sounds around, a little confining but I was too tired for it to bother me. I must’ve nodded off because again her voice woke me.

“Okay, Pimpster, I’m going to shut this door now.” She had her hand on the faded brass knob. “Are you staying or going? I don’t want you waking me up because you want to take off night-crawling with your buddies.”

I’d been having a dream where I was chasing this cat down an alley. It was a recurring dream, and I’d gotten to the part where the cat disappeared amongst the overflowing dumpsters leaking restaurant grease and I had to search him out with my nose, so I was eager to get back to sleep, back to my dream, and back after that cat. That cat was a mean piece of work, and the natural order of things drove me to take him down, so I just closed my eyes and let her close the door.

She slept late and so did I, and as soon as she opened that door, I went outside and got rid of some of that canned chili and marked the trees out in front of the old house. When I heard her making noise in her kitchen, I went inside and was treated to a bowl of scrambled eggs, something I’d never had before, and they were a big improvement on the chili. A while later we walked back to the 7-11 and she got in a car with some guy and they took off. I fell into my routine of hustling the 7-11 customers for some of their chips, though I wasn’t quite as motivated since I’d just eaten a bunch of eggs, and eventually I curled up and took a nap. The cat had returned in my dream and I’d discovered which dumpster he was hiding behind, when the fat man from animal services woke me by slipping a noose collar around my neck, and I was tethered to the end of the long pole he held firmly with both hands.

All I could think was that I was on my way back into the system again and this time it wouldn’t be so easy to get out. My puppy cuteness was gone, and I had the physical and emotional scars from living on the street. At least I knew not to bite the rubber hand they used to temperament test the dogs being processed into the the pound, even though its rubber skin smelled just like a chew toy I’d had in my first home as a puppy.

I was being led to the back of the truck when I heard her shouting. “Hey, you! Asshole! Where the fuck you think you’re going with my dog?” The car she’d just gotten out of drove off behind her and she was waiving her arms and marching right at the fat man holding the noose-pole.

“Well, he doesn’t have a license and you don’t have him on a leash.”

“Look around, man. Do you think anyone gives a damn about leashes and licenses around here? Get real.”

Then a big man carrying an eighteen-pack came out of the 7-11, stopped and stood very still, staring at the fat man. When another dog did that to me, they meant trouble. “If she says he’s her dog, man, he’s her dog,” he said.

The fat man shifted his weight uneasily under the intensity of his stare. “I’m going to cite you for failure to license your dog and having him off-leash. It’s a pretty hefty fine. Are you sure this is still your dog?”

The big man with the beer set his eighteen-pack down, squatted down next to me and gave me a pat. Before the fat man knew what to say, the big man had loosened the noose and I was free. “There you go, boy,” he said and thumped me on the rump.

The big man stood to his full height. “It’s already done.” He tucked a few bills into the fat man’s shirtfront pocket. “You look like you could use a break. Why don’t you go on inside and get yourself a couple of those chili dogs they sell here.” He picked up his beer and opened the door to a big car. “Come on, babe,” he said to my friend. “Get your dog and get in. I feel like having a party.”

As she hustled me onto the car seat in front of her, she whispered to me, “You owe me one, Pimpster.”

“Pimpster, huh?” the big man said and chuckled. “That’s my kind of dog.”