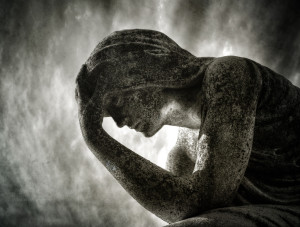 Left Behind
by J. Katz

When my mother died, eight years ago, I stopped reading poetry. A strange thing for a poet to say, but it’s true. In fact, it wouldn’t be overstating it to say that I hated poetry after my mother died.

Poems felt false. I resisted, especially, the kind of piece whose impulse is to resolve. These poems, many of which were sent to me by well-meaning friends, reduced death to a salvo. It was unbearable to be confined to the limits of their “meanings” at a time when the territory of mourning was expanding before me, and it appeared to be infinite.

My discomfort with language spread from poetry to moment-to-moment thinking. People said that I would find a metaphor for where my mother was. I understand this often happens for grieving people. But when my mother died, I grew suspicious of metaphor. Metaphor insisted: your mother might be the sea. I tried to imagine her as the sea. I tried to feel around in my soul for whether my mother could ever become the trees. But I couldn’t. Metaphor said: you are deficient, you have not found a place for her.

I could not imagine what form she might take partly because I had not settled for myself that she had “gone.” Even today, I sometimes hesitate at the verb. Occasionally the people who wanted to comfort me in grief seemed discomforted themselves. Their faces were tense, as if anticipating an unreturnable emotional volley. I tried to find an expression that felt honest and, at the same time, safe to use after a casual “what’s new?” There wasn’t one.

I remember once, when I was 12, trying to reckon with the idea that my mother would one day not be here. I promised myself that when the time came, I would say “dead,” because it was the true word. I understood “passed away” as a pretend phrase adults use when speaking to children and the infirm. Decades later, when I came back to claim the truth, I discovered that “died” is only a syllable from the slipstream, useful for emails to one’s employer, but otherwise featureless as a light switch.

Poetry felt drained of its possibilities by the time I stood graveside. My disorientation with language was complete as my mother’s coffin was being lowered into the ground and the rabbi read out her name: Elaine.

Elaine. Something seemed off to me about this. A mistake. Maybe even a lie. I don’t know why, but I was absolutely certain of one thing: That is not her name anymore. It was as if someone had whispered this message into my ear. It did not have to do with anything poems had said, or anything people were saying after the funeral, as we were spooning egg salad and potato salad into bowls. “Elaine is with Tom now,” someone told me. And “Elaine is in a better place.” Not Elaine, I thought to myself, as if it were an obvious error of fact that any proofreader would catch.

The next week, while going through my mother’s things, I found an old etiquette book. In the chapter on condolence, there was a drawing of a woman’s hands, narrow, graceful, cartoonish 1950s hands, holding a teacup. The grieving person, said the book, will forget to eat, but she may accept a cup of bouillon. Reading that, I felt, truly, like a pale gold light moved over me. I felt the weight I had been carrying ease just a bit. The etiquette book was not elegiac. It did not offer beauty, or a “message.” Its author spoke from a time when people thought about grief and knew what to do when it happened, a time when grief was an ordinary household condition. The grieving person, the etiquette book explained, is ill. The assessment was as flat and serene as a sickroom tray. This language had possibility. The etiquette book offered a calm voice, recognition, an assurance that I wasn’t falling through space.

Several months later, I was sitting in a theater watching Sarah Ruhl’s play Eurydice. After marrying Orpheus, Eurydice dies. In the underworld, there is a chorus of stones that addresses the audience.

Eurydice wants to speak to you.
But she can’t speak your language anymore.
She talks in the language of dead people now.

This was it. Further to the communiqué I had received at my mother’s grave, and to my problem with poetry while mourning.