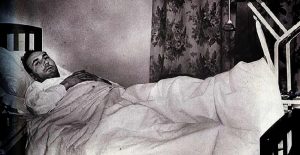 The Last Words of a Genius
by Nathaniel Tower

The crowd gathered around the dying man’s bed, waiting for his last words.

He was a genius. The most prolific writer and philosopher to ever live. He wiped his ass with the words of Shakespeare. The thoughts of Plato, Socrates, Descartes, and Nietzsche were used to clean up his dog’s shit. Jesus wouldn’t have been fit to loosen the straps of his sandals.

They waited. Throngs of them, visiting his bed in shifts. They weren’t disgusted by his festering sores, nor were they overwhelmed by the foul stench of his stagnant bowel movements.

They waited for years, someone always watching over his bed, usually dozens of people, sometimes hundreds. They recorded every word he spoke.

Whatever he said, they wrote and tried to interpret. They studied it in classes at the universities. What did The Genius mean by Get outta my damn face? Essays were written. One man received his PhD based on his research concerning I need water.

They continued to watch and wait. They were eager to learn what brilliance he would bestow on them before his breath had finally been sucked away.

Where are my shoes? It’s too bright. Please clean the shit off of me.

They didn’t look for his shoes. They didn’t dim the lights. They left the shit on him.

More classes, more dissertations. Countless biographies were penned.
Millions of books featuring the Deathbed Words were sold. The Dali Lama gave a lecture on Where are my shoes.

The crowds grew exponentially. The longer they waited the more of them there were. They began to place bets on what the final words would be. Millions of dollars were wagered. Everyone was listening. Tickets were sold for a thousand dollars per minute for admission into the room just for a slim chance to hear the brilliant words.

They began to look for elephants. They licked toes to try to create fungus. They dyed their teeth green and tried to eat cake.
More lectures. More books. They were translated into thirty-five languages and sold all over the globe.

Still they waited. Still he spoke.

The bed branded boorish bricklings. My hair ran away. Pens are exploding in my eyes.

They tried to make their own bricklings. They searched for his hair. They made pens explode in their own eyes. None of them lost faith.

Missionaries shared his words with starving people in third-world countries. Religious texts were rewritten to incorporate his ideas. People who had never heard the words Jesus or Buddha or Mohammad were shouting The Genius’s name in the streets.

After five years, he finally spoke his last words. Eighty-three men and women were lucky enough to witness the words firsthand. Hundreds of millions watched on television. There were dozens of tape recorders and video cameras to ensure accuracy. They all heard the same words, but they would all interpret them differently for centuries to come.

It was all drivel, he croaked.

Some wept. Some applauded. Some burned all of The Genius’s words. Some killed themselves.

Left alone, the genius said nothing.