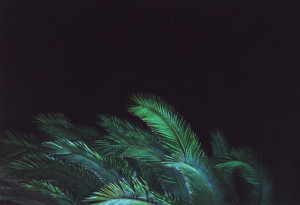 “Do you think Miss Saeki knew what all the lyrics mean?” Oshima looks up, listening to the thunder as if calculating how far away it is. He turns to me and shakes his head. “Not necessarily. Symbolism and meaning are two separate things. I think she found the right words by bypassing procedures like meaning and logic. She captured words in a dream, like delicately catching hold of a butterfly’s wings as it flutters around. Artists are those who can evade the verbose.”
–Haruki Murakami from Kafka On The Shore—

…and yet there’s damnation in brevity so let’s
show our work for partial credit seating guests
kitchenside for food prep & entrée in this poetic collage
casserole where process puts a special sauce on the product..
mankind is undone by its search for meaning thru ‘Art’
mamming macaroon brigadoons into personal
preference universalivating standsardines
& Monsanto Medley.
i peek at the world from my front porch then go back inside
(quick-as).
..on my bi week i wake beside guys & gals
realizing i’m sleeping in bedlam and have dreamt
of glistening fields of ragweed pollinating planet wide.
Life is what happens when you’re busy making planes.
–Too much scrutiny leads to mutiny and Polynesian orgy
for water bottled in Fiji.
..it’s strange gravitas to walk the strait and n air row fe linear..
i’ve found truth between the lines in books of lies
and deception in nationally acclaimed factual gospels.
There’s a coroner on every corner.
Those who leave it will come back to it.
Randomly, the ones who love beauty the most
need to be the farthest from it.
..& Ultimately we end asking:
“What’s ‘Jack’ short for and why’s he wearing skorts?”

o n e
lalochezia: The use of vulgar or foul language to relieve stress or pain. (Wiktionary).

Sons of motherfuckin’ bitches!
A toilet in the Alamo is not an à la mode!
& 20,000 lycanthropes under the sea are not sub-wolfers!
You can’t broaden your horizons by taking
panoramic pictures!
Let’s film these asshole painters
painting and like the shit
even more when
they tell us what it means.
i took a leap of faith
and ended up
a sponge-bathed paraplegic, once,
so pardon the shitty low T pussin’-out–
Quickie mart is the tricky art, you cocksucking bastards.
iconic: ironic–laconic: masonic.
yo dickheads, we spent all damned day
reading lyrics to songs we’ve heard
since childhood and are no better
off minus the catchy music. . .
Q & A is followed by T & A.
The young man will ponder
upon his first wet dream;
The old man anticipates
hemorrhoids .

What ever
will
become of
us