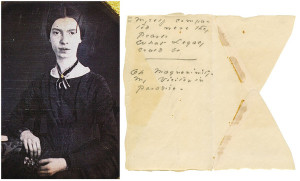 Like many a Connecticut Valley puritan, Emily Dickinson was practical, inventive and private. Dismissing the commercial marketing of poetry an “auction of the mind,” she pioneered a very personal version of desktop publishing, creating 40 handwritten, stitch-bound volumes of her own poetry, each in an edition of one.

It was during a period of extreme productivity, in the early 1860s when she was in her 30s, that she began to confine herself to her family home in Amherst, Mass. There she took to wearing a kind of work uniform of simple house dresses. A single example, made of plain white cotton, survives. It is comfortably loose, easy to clean, and equipped with a capacious pocket for holding odds and ends.

Certain of those odds and ends, in the form of slips of paper, have attracted scholarly notice over the years, and close attention during the past decade. In the mid-1990s, while examining Dickinson material in the Amherst College Library, the literary historian Marta L. Werner came across a small, irregularly-shaped collage cut from recycled 19th-century envelopes and covered with writing in Dickinson’s unmistakably hieroglyphic script.

Enchanted, Ms. Werner started a search for similar items in other collections and found dozens, long familiar to Dickinson experts but never examined as a group. Most were less elaborate than the collage. Some consisted of semi-intact envelopes that had been gently pried apart at the seams and flattened out. Others were fragments: torn-off corners of envelopes, detached flaps.

Whatever their configurations, the pocket-size papers shared one feature: sentences, stanzas and entire roughed-out poems pencil-written by Dickinson herself.