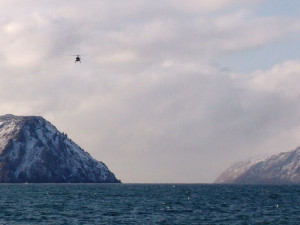 “Hellish Pathway to a Portal”
by Jesus Chameleon

The freezing snow melted fast at the end of Fall in 1949.  Priscilla was moving from California.  Her brothers and sisters and her mother, Rosalind, were returning once and for all to the isles.  Mr. Jose, Priscilla’s father, had to stay behind because of military orders.  The trip to the Marianas was going to be a long and horrific one.  The newly ended War left much doubt as to a safe route home.  For Priscilla, this was to be the beginning of many nights of horrors.  For her not-so-lucky siblings, it was to be a night in hell.

While breaking through the frozen Bering straits, lightning from nebulous clouds flashed and struck the cabins where Rosalind and Priscilla’s siblings quartered.  Simultaneously with a screeching, crashing sound, a UFO-like object escaped into the nippy night air.  All she could see was a hellish pathway to a portal in the sky vacuuming her siblings upward as they screamed in horrific terror, but in a dreamlike state because the airship had already disappeared.  All that remained in the cabins were skeletons with bloodstains  and some beastly mark. Petrified, Priscilla screamed for help, gripping her crucifix necklace, only to find she was the only surviving member of the passengers and screw.  Having been taught boating safety by her sailor-father, she quickly radioed an SOS for help and fled the Latte via a lifeboat and was later rescued by the Coast Guard from the Aleutian Islands.

Priscilla is in an infirmary, today and there repeats the names of her family members and some reference to the mark of the beast.  What the Coast Guard found on that ship would raise your hair.  An exact sanguinary photographic representation of her siblings and mother were etched into the grain of the Latte’s cabin walls.