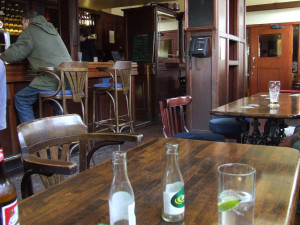 The pubs are packed
with people taking the scenic route
through a Smith’s song.
At first, it sounds like fun,
but all of those bright, chiming chords,
disguise a deep seam of Misanthropy.

All of the social drinkers
are fine until the fourth pint
and they fancy themselves as a wit.
A philosopher.
A Rock star,
Or Hitler,
and anyone who doesn’t fancy them is either
gay, a lesbian, or doesn’t know how lucky they are.
Times were when they could have had anyone in the room.

The sad fact is that they are wrong,
because not everyone is attracted by a beer belly,
and the types of view that the most right wing of right wing newspapers
would find offensive.