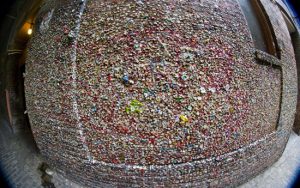 Old Gum
by Pat A Physics

Spiders were inside the pipes. I pointed out a nesting area to the man who had let me in here to take photographs. The man’s name is foreign, and I am trying hard to remember it. Most of the lumberyard had been a breeding ground for termites and wasps. The corner office is covered in flaking white paint and the floor has huge holes in it. There is a break room that has the worst animal head hanging from a wall. It looks like it was once a wild hog, but now, covered in webs and dirt, discolored from the humidity, it looks like an enormous rat head. In one of the vending machines, I saw a snake coiled around a bag of chips. The macro shots of the snake are incredibly good because I had the plexiglass protection of the vending machine. My tour guide put an end to this when he inserted a coin into the machine. The snake dropped down into the bottom, and so I ran away. When we were eating some food at Stuckey’s after the photo shoot, I asked him why he wanted to buy from the machine. He said that he is fond of old bubblegum and how it would crumble and turn to sand in your mouth, and then become normal gum. “Like in old baseball card decks,” he pointed out, “or when you find an unopen pack that you forgot about in your golf bag.”